I spent the 6 tokens on Hierro and replaced Marquinhos TOTY for him. So far I'm very happy that I picked this beast and will likely keep him for a very long time! His interceptions, his strength combined with his really good passing and dribbling (agility is very good for a CB) makes him one of the best CBs I've used in FIFA. Especially regarding the fact you only need 6 tokens to get him.

So far I've used anchor on him which felt already good and boosts is strength and aggression even more and boosts his jumping to the maximum. He's always a threat when you have a corner kick and wins every heading duel defensively as well. I've bought a shadow chem style now as he's not one of the fastest CBs and hope that I will see that pace upgrade in game.

Of course you can link icons with everyone but he'll make strong links to popular players like Alba, Piqué Scream, Butragueno, Villa, Guardiola and many more.

I play him alongside Alba (LB), Diego Carlos RTTF (CB) and Capa IF (RB). My defense honestly feels like a wall out of steel - on steroids.

Really good agility and reactions for a CB 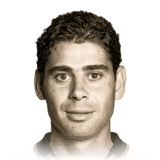 I didn't get him in Icon Swaps. I ended up buying him off the transfer market so I could have some Spanish CB pair with my Futmas De Gea. He's about 300k and I'd say that's a fair price for him. I'd say he's good but not as great as other top tier CB's around his price or more. He's great at stopping attackers and getting the ball out of harm's way but can get beaten easily from players who dribble well with fake shots and ...
Read full review

So i've had this Hierro card since Icon Swaps. Around that time he was easily one of the most broken defenders in the game, he would win every header, every tackle and with a shadow applied he would get back in even the worst 1-on-1 scenarios. But i don't know whether its due to the new range of cards of attackers coming out or recent updates. But the past 3 Weekend Leagues with this g...
Read full review
0
/600
Update my avatar Dos and don'ts
Top Rated
New
Controversial
Show comments