As a Liverpool fan and admirer of King Kenny Dalglish, I knew I had to try this card out at some point. The middle version seemed like a better deal since the small 150k price difference comes with better stats in almost every category, mainly passing and dribbling. Kenny is leading the line both in a 4231 and 4411 with Neymar right behind him. Playing with those two players are probably the most fun I’ve had in Fifa so far.

Kenny comes with good stats all over the board. For the first time this year I actually went to the transfer market and bought a Hunter for him, because I was about to play him as a single striker I felt the need to max out his pace. The 80 vision and 85 short passing is just about enough for a striker, and with the lowest dribbling stats being 89, I don’t think they need boosting either.

The thing about top tier strikers for me this year is that when they get the ball on their strong foot, in a good angle, with Piques auto blocking giraffe legs out of sight - chances are they will bury it. The key is to get a striker that consistently can find himself in these positions, and that’s why you’re paying 1.5M for Kenny Dalglish. The guy will make runs like nobody’s business, shoot rockets with either foot, and if he’s not first on the rebound he’s probably not on the pitch at all.

The problem is not that Dalglish doesn’t finish like a 1.5M card should, but when you’re competing with the likes of middle Maradona, prime Socrates and middle Garrincha, various future stars and other promo cards - not to mention that you at the time of writing almost can get Messi, Neymar and van Dijk for the same price - you could argue that excellent finishing doesn’t cut it. When you get a top tier attacker you expect them to be excellent in more than one category. Sure he is fast and has some really good dribbling stats, but if you look past the finishing I felt that something was missing, something keeping him from being absolute top tier. He is fast, but lacks the bursting pace to beat defenders just by running past them like Mbappe or Traore. He has good passing, but he isn’t a playmaker like De Bruyne or Pirlo. He has good dribbling stats and feels great on the ball, but can’t turn defenders inside out and create space like Neymar. And of course he doesn’t have the physical presence or aerial threat like CR7. But when it comes to finishing and scoring goals, I couldn’t wish for more.

Can you rely on Dalglish to win games for you? Yes and no. Yes in the meaning that he will score the bullshit goal in extra time, somehow find the small gap between the defenders legs and into the bottom corner. But at the same time, he needs a partner to feed him the scoring opportunities. A De Bruyne playing through balls from midfield, a striker partner to play the one-twos with, even a fast winger who can beat the defenders with pure pace and whip in a cross. If you play with a single striker like me, patient in build up and when the striker gets the ball he pretty much only has one job, to put it in the net, Dalglish is what you want. If you can justify the price tag and surround him with some half decent players, I would go for it anyway of the week.

What do you get when you buy Dalglish? Let me put it like this. Have you ever played with a striker, and everytime he shoots the ball you think: ”Wow, that was actually a nice shot”? When you cut inside and go for the finesse shot, he decides to perform some kind of low driven curled shot that goes just inside the far post? Or when you are absolutely certain the defender will block it and yet it somehow finds the back of the net? He is simply flawless when it comes to finishing. 5 star weak foot, outside foot shot trait, no clunkiness in bad gameplay. He is definitely a must try this year. 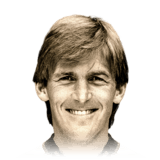 I was sceptical at first look at this card, especially considering his price. Within the price you can get a bunch of really good strikers. However, after the first WL I can firmly say that Kenny Dalglish the KING is above all of them, including CR 7. He is trully excellent and I am sure he will be vastly used in this FIFA. What makes him special is his incredible movement and clinical finishing with both feet. In details:
Read full review

My favourite player this year

I'm a Division 2-3 player, finishing gold 1 close to elite in WL most of the times. I already tried lots of expensive strikers in Fifa 20 like Baby Maradona, Middle Cruyff, Baby R9, Del Piero and so on and I have to say that Kenny Dalglish performed way better than any of these players. What makes him special is the ability to keep posession even when getting tackled by top tier defenders and the ability to score with both ...
Read full review

Wow, he is everything i hoped he would be, just insane i spent 2.1mill on him and i could not be happier with him. In a 2 st formation he is one of the best. He started to carry me in weekend league and rivals, any tough game he would be the one to pull me through. If anyone is a liverpool fan and is thinking about trying him out, please try him, he is that good.-11 out of 13 games i played were in the wee...
Read full review
0
/600
Update my avatar Dos and don'ts
Top Rated
New
Controversial
Show comments