So, after using Van Dijk for most of the year like everyone else, i got bored and upgraded to this guy. WHAT a decision that was. This guy is insane, rarely ever gets outpaced and he has such a big stock in game it feels like players really do have to take those extra few touches to get round him. The biggest pro of this card is that he eliminates the sticky some plays (Mainly griezmann and salah) have in the game as when he tackles, he barges the player out the way and brings the ball out of the other side, which is epic. His agility and balance makes him feel very responsive and able to deal with scoop turns and dragbacks with no issue. His passing is exceptional and his pass power seems high which is a nice touch as it means he zips the passes into the midfield and takes a few players out of the game his ball control is also crazy too, never takes any weird drag touchs and just glides about the pitch. Overall an outstanding card and having used the 89 as well i would say there is a minimal difference but this card is noticably better on the ball (even though the agility and balance is lower). My advice is ... BUY HIM NOW! you will never regret it, a tru end game card.

no sticky when he is around

Stock and height makes him so hard to pass

Only con is the price, but if you are reading this review i assume you can afford him lol 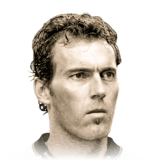 I packed this guy originally thinking I had packed Umtiti, to then find I packed Laurent Blanc Prime was great. Having used loan moments Maldini and loan van Dijk, this card is easily better than Van Dijk and about the same as moments Maldini. I have lost count of the amount of times I raged and smashed something, thinking I had conceded, to only find that Laurent blanc had outpaced Adama Traore, after he was in behind my d...
Read full review

This guy is the best CB i have used this year. I'm a gold 1 Player normally, but when i packed this guy i had my first time elite. 24 wins 6 loses. he had every ball no one can pass him just a amazing player. if you can buy him, you have to, you will see your result will be higher at the Weekend league
Read full review

I wrote a long review on 92 Malang Sarr. I have been using this guy for the longest time and I'm so used to him and I know how he moves and his timing. He rarely missed a tackle and one thing I like a bout him is when u hold the teammate contain, not only he blocks the passing lane sometimes he auto tackles too. Weird but he's kinda like the only defender I know that does it. I'm a lazy fifa player and I always use jockey a...
Read full review
0
/600
Update my avatar Dos and don'ts
Top Rated
New
Controversial
Show comments