Let me keep this short and sweet. If you have tried the Baby and Mid version of Dorgba you may be left underwhelmed. I was, he felt like he did back in FIFA 12 which wasn't great.

Now i am sure EA decided to change the body type/animation of his prime due to how underwhelming the players found the first 2 versions as i do no know of any other Icon that has a different body type other than Maradona, i could be wrong though?

anyway, if you see a comment saying 'He is good once you get used to him' i would take that as a 'this player hasn't actually used the card, and is a seller' becuase if you cannot get on with his prime i have no idea what you want in a striker

So fast (animation upgrade) trust me feels more like 95/95

NOT CLUNKY AT ALL

6'2 and although turning and dribbling is great with Sniper/Engine he isn't a Garrincha/Messi/Neymar who turns on a dime. 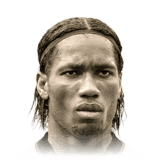 What a player man...First of all, i´m a spanish guy and my english is not good enough, sorry for the gramatic mistakes.I try Drogba in a 4-4-2 between Kylian at STs and.. wow.Is very big in the pitch and is so far the bet...
Read full review

I can't even create a title

Please, don't get me wrong with the title. I just can't describe how good Didier Drogba is in simple words.I am not native speaker, so if you spot any grammar mistakes don't be angry at me.I tried many different icons and "well-established" strikers during the FIFA 20 lifetime. I have even used KDB TOTY card as ST for some time - just for fun of having such rare card. Still only Didier Dr...
Read full review

Absolute Beast! He makes Fifa fun. I was so tired of the game and being in quarantine decided to go for the most fun option available. So I got the best version of Drogba I could with my coins. The combination of pace strength and TOTY level shooting along with 4* skills is unbelievable. Use him to his strengths and you will be laughing every time he shrugs off a meta defender (VVD, Varane, Ferdinand) and ...
Read full review
0
/600
Update my avatar Dos and don'ts
Top Rated
New
Controversial
Show comments