I used Gary Lineker as the striker in a 4231 formation. For instructions, I have him on Stay Central, Get in Behind, Normal Interceptions, and Stay Forward.

Pace (9/10): He is quick enough to get away from defenders, although he doesn't quite have the scorching pace of TOTY Mane, Mbappe, etc.

Shooting (10/10): His finishing is next to perfect on his right foot and still very dependable and dangerous on his left. while his curve may not be that high, finesse shots with the right foot usually beat the keeper for pace.

Passing (8/10): His passing is very good in on the ground from a short distance, but I would try and use your central attacking midfielder to get it to the wingers or fullbacks down the flanks of the pitch.

Dribbling (8/10): He keeps the ball very close to his body and his first touch and shot quickness are a huge asset when finishing, the response time from hitting the shoot button to him shooting is the fastest I've played with.

Defending (3/10): He puts a fair amount of pressure on defenders while pressing, but at his out-in-out striker role he won't be tracking back much.

Physical (6/10): His strength and physicality is nothing to write home about, you'll find yourself using his dribbling and pace to get into dangerous positions more than his strength. 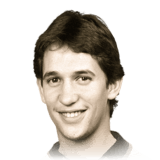 I'm a Div 1 and occasionally Elite 3 player, and I've have been through my fair share of strikers recently; 90 Butra, 92 Lewandowski, 90 Best, 90 Hernandez, but I didn't seem to settle with any of them. That's when I decided to take a risk and try out good old Gaz here. I can honestly say in terms of consistent goal scoring ability, Gaz seems to trump all other strikers I've tried - so much so that I've had to write a revie...
Read full review

He didn't crap himself that much

When I opened my prime icon pack for the swaps and saw the English flag, I knew it would mean trouble. Then Gary came out and I yelled: Why! Why again, EA?It took a while to calm down, especially knowing all the decent icons I could have gotten. Man, I said, at least not Inzaghi. Then I thought: well, might as well give him a spin in the WL, I guess.So I put Gary (with engine) into a 41212 narrow at...
Read full review

I was unlucky enough to get him in my prime Icon pack. I was quite happy to get him actually because it could’ve been way worse. And I was excited to use a player hardly anybody uses.But oh my... I know now why nobody uses this guy.You should consider that I am not that good in FIFA...I’m actually pretty bad. I played my first weekend league last week and finished Silver 1. With 13 wins... because t...
Read full review
0
/600
Update my avatar Dos and don'ts
Top Rated
New
Controversial
Show comments