So as I wasn't there when there was the FB Neuer and I needed a Keeper for my Bundesliga setup, the choice fell on normal gold card Bürki. I didn't expect much since he was pretty cheap an I planned on upgrading to van der Saar, but I was pleasantly surprised with the amount of times he saved me in high pressure moments in WL.

As a relatively short GK he needs to come up with nice reflexes and saves to both posts for me and let me tell you the times he saved a shot I was sure was going in he kept out of the net. Personally I play him on balanced instructions to decide for himself when to come out to clear a cross or clear the ball before an running attacker.

Same as most GKs in this game (except ter Stegen and a few others) he sometimes has sort of bad thinking being down to FIFA 20 screwing us up in certain situations but for me he makes as few mistakes as ter Stegen.

As a cheap GK in the Bundesliga with the great CBs of Zakaria and Akanji to partner him I can only recommend this guy for the low price you pay.

Reflexes on the line

Distribution with feet and hands 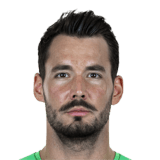