I needed a Bundesliga right winger or right midfielder to play striker in-game when I came across Shapeshifter Rashica and thought that he would do a decent job until I managed to save up for 90 Figo but now there is no way I am selling this card. I partnered him with my big expensive brand new signing shapeshifter Mertens but it was Rashica who stole the show. My game plan ended up being play long balls to Rashica and let him rinse the defence again and again before slotting it past whatever keeper was in goal and with a 4 star weak foot he was basically capable of scoring on both feet. He outshone Mertens so much I ended up selling him and picking up Winter Refresh Limbombe, yet the system stayed the same. I have a Deadeye on him to max out his finishing and make his passing immaculate and it works brilliantly

With a deadeye is almost perfect. Scores the majority of his chances but shots outside the box rarely find the back of the net and every once in a while can miss a good chance. Still his sheer pace combines with his clinical finishing means he normally gets a goal at least once or twice a game. Personal favourite is when i won a game 7-4 and he scored 6 and assisted the other goal. Quality.

With a deadeye he gets 96 short passing which makes him perfect for one two's and he is also capable of playing some really nice long balls over the top and through balls to split the defence. Has 12 assists in 11 games for a reason.

His agility makes him so so smooth on the ball and even when the EA severs are lagging like crazy when he touches the ball everything turns to gold. I like my attackers to have at least 4 star skills and he matches the bill perfectly, his spins and step-overs are perfection and I can honestly say he is one of the best dribblers i have ever used in any Fifa (and this is including the days where FIFA was actually fun like FIFA 15 and 16)

Have him on stay forward.

Honestly a lot stronger than the stats show but never going to be a Gullit or a Van Dijk but is always capable of going shoulder to shoulder with defenders but don't expect him to be Anthony Joshua. Still way stronger than his stats suggest and thanks to his stamina even in the last minutes of games he is still making runs but don't expect him to still be making those runs in extra time for FUT champs 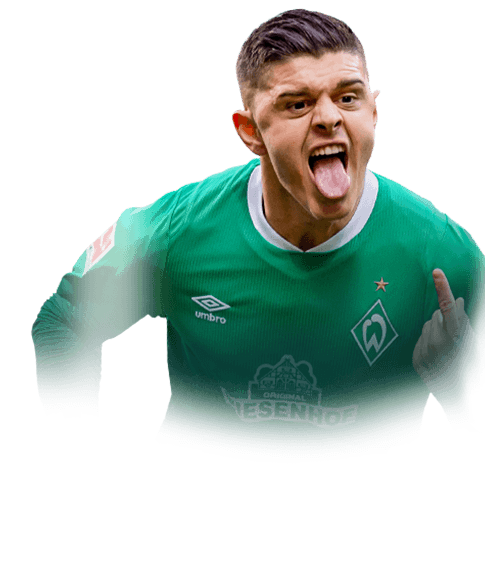 So, I've been using POTM Gnabry for a while now, it's been 316 games with almost 150 goals and over a 150 assists, but he was starting to feel meh. Rashica came in to take his place.I've bought him for 125k for this WL, did 18 games with 24 goals and 9 assists for him.
Read full review
0
/600
Update my avatar Dos and don'ts
Top Rated
New
Controversial
Show comments