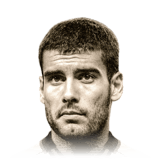 WOW. That is the first thing that I said when I played with this card. He feels like an Icon in every way. With his passing being so clean, you don't even need to worry about putting an engine on him. He has good enough agility and balance that he is stable enough to throw a player off. Another thing I love about him is that he stays in the midfield position. No matter what instructions I put on the other players, they alwa...
Read full review

Guardiola's Prime Icon Card is absolutely slept on this late into the game! Honestly, the best review I can give this card is that he plays like Kante in-game with the physicality and height to match forwards for over-the-top through balls and corners to head the ball away!
Read full review
0
/600
Update my avatar Dos and don'ts
Top Rated
New
Controversial
Show comments