Alright lads. I somehow managed to pack moments Veron in an electrum pack the other day. Sold him for about 800k and then bought this geezer for dot on 1 mil. I played him as a lone striker in a 4-2-3-1 using the engine chem style.

Honestly he's the best striker for his price.

Very yummy indeed. This guy can bang them in from anywhere at any angle. A few times ive accidentally pressed shoot and it just goes in. He has the finesse trait which means he scores those mental finesse shots from outside the box. Not to mention the outside of the foot shot trait as well as 97 finishing and composure. What i will say is that his positioning is the best i've seen. He's always making runs and getting into just the right position in the box. Also the 5* weak foot! Norty.

Also very nice, he's not the most crazy dribbler but with an engine he has almost maxed out dribbling apart from agility and balance. But for me it's perfect and he can easily dribble past defenders and hold the ball up very well. Also responds very nicely to fake shots and ball rolls.

Perfect for a striker, 86 short passing and 84 vision is perfect for short link up play. But most of the time theres no point passing, just shoot u donut.

Feels fast but not mbappe, but he certainly has enough pace to get away from defenders in a one on one and make runs down the line.

Very nice indeed. In his first game he put prime vieira on the floor. His strength is nothing crazy but enough to out muscle full backs and have an extra second on the ball against big CBs. He hasn't really had any headed chances seeing as how bad it is on this fifa. He did have one chance at a very odd angle and it was a good effort. Power header trait is also pretty nifty.

Lastly his sexy sexy moustache is the cherry on top.

Can sometimes feel the lack of agility 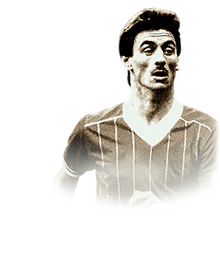 The player I never knew I needed

I know Ian "The Ghost" Rush hasn't been the most popular player in FIFA 20 but this new moments card with the improved 5 star weak foot is incredible. I use this guy in a 3-5-2 in game with 87 Haland as my other striker. They complement each other perfectly. I sold TOTY KDB to get this guy and it has taken my game to a whole new level. All games played in Div 4 Rivals and WL.Pace:Pa...
Read full review

Rushy is a beast

This guy is an absolute machine, scores everything inside and outside the box. It doesn't matter which foot. Since it is so key to have a 5* weak foot player in FIFA 20 he is so OP in front of the net. The opponent never knows which way I am going to go. He is not the most used player either, so many of your opponents will not know which his best foot is either.
Read full review

PICK HIM UP NOW

He isnt neymar but he is still amazing. I used him next to ben yedder in 442 for nearly 2 WL's. They caused havoc. I reached elite for the first time because of these 5 star weak foot beasts. If you are looking for a 5 star weak footer, he is your guy. He will give links as he is an icon. He is very under rated imo. And lastly if he has the ball, JUST SHOOT! trust me...
Read full review
0
/600
Update my avatar Dos and don'ts
Top Rated
New
Controversial
Show comments