This man right here is my wall before my second wall, Armani. I used Van Dijk and he was good for a while but later started playing really poorly. I decided to sell him and everyone else in that squad to build an Argentine squad. I was very unsure about the new squad because as an Argentine, I know we never have good defenders. But when EA came out with this card i did him right away. I linked him with Bustos, Armani, and CDM Martinez who I play at CB. With a shadow chemistry bringing his pace to a 92 and 84 agility he looks like he can play wingback, other than his body type. I've had many opponents struggling to get past him for the entire 90/120 minutes of the game. And it really is hard to get past him, I would be super frustrated too if I had to constantly go up against him. There were various occasions where my other CB got a red card but I just let Lopez be a single CB and he still played phenomenally. He is so fast yet so strong. Not the most agile of players but what CB is that other than Cannavaro. (And no not Opara even though it says he has 97 agility it feels like 70). Anyways he has amazing, simply amazing standing tackle and strength. There have been only a few instances where I have to chase down an attacker with him and his slide tackle always gets the job done even from behind without committing a foul which he somehow pulls off. His short and long passes are very good and they help build up counter attacks very quickly.

links depending on yo squad. 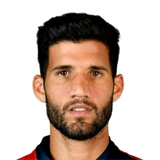 This card is insane. I did the sbc for 65k and it was the best value I’ve ever got out of an sbc. His defensive stats are amazing, he has high agility and very high physical stats except for 67 stamina which doesn’t matter he can easily play a full game. He has very good dribbling for a cb and 95 short passing and 96 composure means he never loses possession at the back. With a shadow his pac...
Read full review

Wow, amazing card for only 9 sbc squads. Him and Bustos make a perfect duo on the back with the OP beast Armani as goalkeeper.
Read full review

I made this sbc for 30K maybe, and for that price you have a player with stats that are better than the stats of some icons. It´s good in every aspect for a Cb, fast, tall, very strong, agile enough and with very good passing.Pace 8/10He´s very fast and can get fast atackers easily.Passing 9/10:He has a very good pass, wich for this fifa is very important when you want to ...
Read full review
0
/600
Update my avatar Dos and don'ts
Top Rated
New
Controversial
Show comments