Moments Petit for 19 swap tokens. Used this guy in drafts, 11-14 games in total but gave me a good enough reason to review this guy as one is not yet up. He played CM/CDM in the formations that FUT draft drafted for me and he played the best in a 4231/442. Petit played amongst and against the elite of players in the whole of FUT, your Messi’s, Mbappe’s, Van Dijks, Neymar’s etc., the list goes on. I can honestly tell you that Petit has been one of my favorite players throughout the drafts, he is such a presence on the field with his slick ponytail, he goes unnoticed with his footballing ability and his physicality. I played him mostly on ‘Stay Back while Attacking’ as I feel the a.i. will still push him up the field on the attack, which did happen.. but in some aspects, this contributes to the abilities Petit obtains. Defensively, there’s no question that he is one of the best defensive midfielders on FUT but following up with his base stats suggesting he can shoot, is quite remarkable and unique I say. I am grinding towards Petit as this guy will improve any midfield.

The Pro’s to this card are as followed:

The Con’s to this card are as followed: 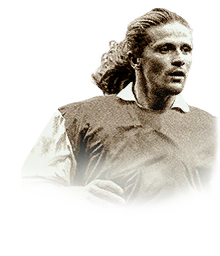 I got him for 19 Tokens in Icon Swaps and going to share my honest opinion with you:I played him as CDM next to Prime Essien in 4231 the last Weekend League.Pace: He does not feel as fast as f. ex. Kante or Essien, but with a shadow this guy is able to chase down most of the strikers.Shooting: He is able to score some pretty sick goals (98 Shot Power, 99 Long Shots) and also at ...
Read full review
0
/600
Update my avatar Dos and don'ts
Top Rated
New
Controversial
Show comments