Carlos Alberto is a difficult defender to explain without having played him.

unlike the other defenders in fifa 20 he is the inico who combines exceptional defensive skills with movements and vision of the game as a class midfielder.

I have tried a thousand times to upgrade it with other strong defenders (van dick toty, de ligt toty .......) but nobody has his ability to move between the lines intercept balls and defend any attacker who comes across.

the thing that makes it different from all the other DCs is the agility with which it moves and the ability to intercept balls as if it had a magnet attached to the foot.

I play it with style. Still in a 4231 and I must say that he has never disappointed me, he always does his.

it is not very high but also it doesn't fear anyone's head ......... its not exceptional height makes it very agile and quick in positioning.

what to say, given its cost of just over 500,000 credits I think that for that price it is the best DC on the square. 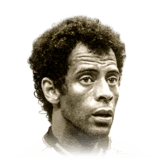 Since there is no reviews I think it is time to write the first review. I have had this guy since the start of Fifa 20, I bought him for 567.000 coins and played close to 500 games with him. He has been partnered with almost every good CB's except Blanc and Maldini. I am yet to find a defender as good as him (currently trying baby Cannavaro and he is 9 out 10 compared to Carlos Alberto). He has outp...
Read full review
0
/600
Click here to verify your account in order to comment Update my avatar Dos and don'ts
Top Rated
New
Controversial
Show comments