So I packed this guy out of my prime icon pack and even though I didn't really need him I gave him a try.

The thing is he isn't that bad he is even a pretty good CDM but I think there are too many con's on this card and so many better options on the market for the same price.

I played about 50 games with him and he was VERY inconsistent. He wwas a CDM with a saty back while attacking instructions and an anchor slapped on him. Some games he was the bst star of the team like he intercepted every pass and made god assists but some other games he felt horribly clunky and wasn't able to do a proper pass.

For me at this stage of the games he is definetely not a must buy player and there are soooo many better options.

1) Defending : When he was on a good match he was a brick wall and made some very smooth interceptions

1) Passing : He was simply unable to do any clutch pass (which is a HUGE con for a game like this). He can pass but only with his strong foot and without any pressure

2) Shooting : HE COULDN'T FINISH ANY SHOT ! Through those 50 matches he might have scored 5 goals (out of at least 40 shots) 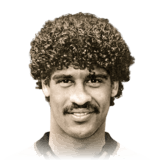 I had previously used Kante as my CDM but I grew frustrated with his lack of presence in front of the defense and his tackling against stronger midfeilders like Pogba, Sissoko, etc. Rijkaard is so good for me protecting the defense but his distribution and physicality is really what sets him apart from players like Kante. I used him in a 4-3-3 (2) with cut passing lanes, stay back while attacking, and cover center (I don't ...
Read full review

Ok so I packed him out of the Prime Icon Pack sbc and I wasn´t sure if it´s an L so I tried him with Goretzka Moments and Ndombele Summer heat in the Midfield. He played CDM in the 433(4) Formation ingame and he was/is unexpected good. Almost every pass is a beauty and arrives to the teammate (in my team was it Kamada or Diaby) which leads to many, many goals especially in the first minutes of the Gam...
Read full review
0
/600
Update my avatar Dos and don'ts
Top Rated
New
Controversial
Show comments