So, you just did your Prime Icon Moments SBC. You put a ton of really good players into it and you're expecting someone huge. Maybe Pelé? Maybe R9 Ronaldo? Maybe Eusebio or Vieira? NOPE IT'S BAGGIO. Now I was pretty bummed at first. 79 stamina? 5'9"? 82 Agility? 68 Strength? 41 Aggression?? This guy can't possibly be good. So I put him into a team with CR7, TOTSSF Dybala and Summer Heat Ibra. In the middle of the pitch, this guy actually does bits. I put a finisher chem style on him to get his shot power to 95 and his long shots to 99 and BOOM. Even with a +10 aggression boost this guy feels amazing. His passing is fantastic and he's small enough to run through defenders and get the ball whilst staying onside. He's perfect for counterattacks and his medium/low work rate keep him in the middle of the pitch without going too far back. It does help that he has strong players around him to push off strong defenders just enough for him to get through, but even without their help he is able to dribble through the team with ease. The best part by far is his finesse shot trait. Any time that you're in the right position for a finesse shot, the ball just glides in the net. Perfect curve, great power, fantastic goals. However, he does have 79 stamina so don't be afraid to sub on somebody around the 75th minute. The other con I had was his physicality. He's not as weak as Neymar feels but he did get pushed off the ball a lot. You have to have patience with him otherwise you'll feel like quick selling him after one game. Don't focus on him too much in game. If you have other players that can score, then you can easily use him to through ball pass to anybody that you need to score. When he is ready, that is the best time to pass to him. In comparison to Nick runthefutmarket's review on YouTube, he doesn't give this card enough time to get in the area or to let him get where he needs to be without focusing on his other players first. If you packed this guy as a Prime Icon or Prime Icon Moments, it's not the end of the world. Use him like you would with Neymar, Messi, or even Pelé. This guy can do everything and more if you learn how to play with him. 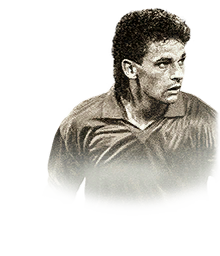