Just wow. I packed this guy as my first ever icon and was going to sell him and buy a team. Thought I'd try him out first and I honestly don't think he will be leaving my team for a very long time. Stats wise seems better than his mid card as he's quicker and has better stamina which has allowed me to put a marksman chem on him and further improve his dribbling/physical. I'm not an amazing player - got stuck into Div 5 after calibrating and have used him in a mix of rivals and legendary squad battles. Really seems to fit the meta this year with the close dribbling and has one hell of a turn of pace from strafe dribbling into a sprint. Surprisingly strong and his low centre of gravity allows him to hold the ball through challenges way more than I've experienced with anybody else. Gets beyond the striker from CAM at will and just about manages to get through the whole game with 80 stamina.

Difficult to compare as the next best player in my squad is Ben Yedder so I'll leave out the comparisons but if I had to guess, he's a stronger, quicker version of Messi with 5* skills and a worse right foot. Have left the value at 4* just because he is an expensive player but compared to some of the other premium icons I can see him picked in way more teams than he was last year.

Absolute beast of a player.

Dribbling- Best dribbler that I've ever used. Beats TOTY Mbappe from fifa 19. Ball sticks to his feet and has incredibly close control. Seems perfectly suited to this meta

Pace- Fastest of all his cards and has a serious burst. Granted I'm playing against teams without similar level players but if you use L1 dribbling and burst out of it with R2, he can create separation with just about anybody

Shooting- One hell of a left foot, right is serviceable

Stature/Physical- His small stature, combined with quite high strength and aggression see him able to ride through challenges seemingly at will. Marksman helps, as would hawk. Biggest surprise of the card! Able to hold the ball well with L2, and dribble through people. Incredibly difficult for defenses to deal with.

3* Weak foot- No getting around it, he misses some shots you think he should score. Dribbling makes it pretty easy to get it onto his left though and he will score easy ones 9/10

Stamina- Gets through 90 mins but does tire towards the end. Once fitness kicks in you'll want to put a fresh card on every game but considering price probably not going to break the bank...

I considered putting height in here but I feel his stature is actually one of his strengths in that his dribbling is so closely controlled and he is surprisingly strong on the ball. That being said, if he's played anywhere other than CAM, height will be more of a negative. 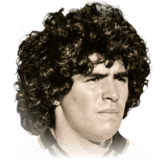 Ok, this is my first review and i thought i had to do it. I packed "el Diego" in my baby icon sbc pack and i was not very hyped until i tried him. In 37 seven matches (FUTChamps and Div Rivals) hescored 52 goals and gave 29 assist, playing as stricker and CAM. Theres nothing else i can tell you, this guy is amazing, by far best player ive used this year, even better than neymar....
Read full review

the hand of GOD

Full disclosure, I appreciate his skill on the pitch, but would not classify myself a fan of the man IRL based on all of his antics off the pitch.That being said, after a few rough goes with the base Icon Upgrade SBC (I got Overmars who was at best a super sub, followed by baby Keane, whom I'd already selected as a prime in the Icon Swaps), I dropped the aforementioned useless baby Keane into this SBC as a...
Read full review
0
/600
Update my avatar Dos and don'ts
Top Rated
New
Controversial
Show comments