I picked up Ter Stegen for 30K at the start of EA access, and early game he was getting butchered game in game out because of rebound goals, so I wasn't too happy. I stuck with him, and once the update came out fixing the goalkeeping issue, he became a god! His handling improved dramatically and he would catch everything or punch it far out of the box. Typically you expect your goalkeeper to be prone to make a stupid mistake about once a game or so, but with Ter-Stegen it never happens. Honestly, I've never felt more confident with a keeper in net in any FIFA. My favorite aspect is his distribution from throws and passes out the back. His 4-star weak foot is probably the biggest bonus for me since I always back around the back with my keepers. The only issue I have with him is when he comes out of the box to get a stray ball, he's so slow that a 90+ pace player can sprint half the field to beat him to the ball when the ball is just outside the box. Despite his slow speed, he's amazing at shutting down 1v1 situations. He positions himself well and spreads his body to make saves with his feet or hands. In my experience, he's 13/17 when it comes to shutting down the 1v1. In general, he's relatively unbeatable in net, if you have a solid set of centrebacks in front of him, then don't expect to concede a goal every game. I'd recommend a La Liga backline of Alba, Lenglet, Militao, and Carvajal. I ran this in FUT Champs and managed 12 clean sheets in the 30 games. 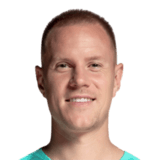 There's Better Out There

I bought this card recently as he looked like a monster, it only took me a couple of games to realise how average this card really performs. Don't get me wrong he is not the worst keeper in the game, he's not too bad actually it's just there is better keepers out there for cheaper. His diving and reflexes are quite good and he saves a few good shots and looks amazing but the more you play with him the more you realise all t...
Read full review
0
/600
Update my avatar Dos and don'ts
Top Rated
New
Controversial
Show comments