I'm writing this review from my own experience of Klose to hopefully give you guys an insight to how he performs in-game so you can decide whether his ICON Swaps is worth it or not.

I'm going to start this differently, with looking at a general value for money point of view. Where did my money come from? I was fortunate enough to pack a baby Vieira in the second week.

Price: 550,000. At the time this was the cheapest on the market but to put it honestly, I do not believe he was worth that much. Due to the meta of the game and the fact that many ICONs are notoriously overpriced, I feel his fundamental value would be worth 200-300k. For those of you looking to buy this card I would strongly recommend looking at Lewandowski, but for those of you considering this german machine for ICON swaps please continue reading.

PACE 8/10:This stat surprised me the most, bear in mind I was using an Engine chemistry style on him but his high acceleration propelled him whenever he got the ball or made runs in behind the defence. Do not expect him to be running riot on the flanks as most full backs can jog past this guy. However, against most defenders (namely Militao) you'll find him able to keep ahead of them.

SHOOTING 8.5/10: His natural habitat is in the box, give this man a chance to turn and shoot and its going in. I would've given this man a 9/10 but I struggled with long shots with this guy. I like to take a shots outside the box, which is usually the case with low depth opponents, Regardless, his volleys are fantastic if you time them properly and same goes for his penalties (4 goals in 4 penalties for me). The runs he makes are phenomenal, if you get this card just hold the ball and wait for his run, its as simple as that.

PASSING 6.5/10: My main issue here and why I have given him this rating is how much he lacks vision, he feels blind to any run made by the wingers or charging runs from my CM's. That being said, he can make those obvious passes and can consistently deliver a L1/LB + X/A ball when you want to run in behind.

DRIBBLING 7/10: Well.... I wasn't expecting Neymar or Messi here but even with the Engine chemistry style he did struggle against agile defenders containing me. This combined with 3* skills limited him to in the box dribbiling and occasionally sending people to Tesco with a L2+LT fake-shot. Very average overall.

PHYSICALITY 8/10: Holds the ball up very well, his 82 strength felt like Drogba's 92. I witnessed this man push VVD off the ball once and consistently held off weaker defenders. For what he does lack in stamina he makes up for in jumping. Yet with the current state of the meta scoring from headers is underpowered as I scored much less than I thought I would in my 30 games with this card (only 6 with consistent crossing). He does however work as a beacon for goalkeepers to punt up into instead of dangerously playing out from the back.

Clinical Finishing in all categories

Decent weak foot, no need to think about positioning him onto his strong foot when shooting

Some of the best heading stats in the game

Not a game changer 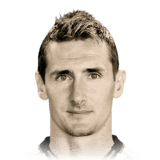