I want to start by saying that i was really reluctant in try this Pjanic card. Because in the past FIFA's, I never was really impressed by him. But i get him on FUT Champion rewards, so why not.

Some players are special only in the CM position and the fact that 433 variants haven't been in a good position colabarote to make some players useless.

Overall the way i play with him is to do the penultimate pass, if you see the squad, suarez is a wall that hold the CB's and make the pass back to Pjanic create the opportunity.

Ok, so let's do the usual rate by stats:

He will not outpace anyone, but can keep the ahead of the opponent for some time.

Ok, the finishing stats really is something to worry about, but he have a good Shot power, long shot and curve. He is deadly inside the area, I don`t shot alot from outside the box but he did a good job when i tried.

It could be a 10/10, the game is more problematic than him actually. He can pass the ball to whatever he wants. 4 WF is good enough to don't do stupid mistakes.

He can make quick turns, I dont use skill moves. This rate is specific to evaluate ball control / hold the ball.

Stamina can last all gam the rest is not amazing but for this stage of game is ok.

Ok, this review is based on 20th Oct. Ofc he is not a endgame player or anything near that, but he is a 87 IF, that will hold his value and you can enjoy until better options appear.

I wouldn't use him as a CM or a CDM 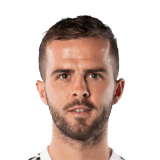