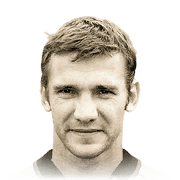 Shevchenko has been a "trouble-some" card for the past 3-4 year. Good finisher but felt heavy on the ball and lacked mobility.

This year I decided to give him a go, since he is not that expensive on the market. And I am happy to say that i liked him A LOT. 100% recommend.

First of, I am a big fan of Sheva in real life. Back in his days with Dinamo Kyiv/ Milan/ Ukrainian National Team.

I bought him every FIFA. and I must admit I always sold him after few games in previous FIFAs. Never liked his card 'model'.

But this year I have a different feeling with this card, Looks like Sheva is one of the best budget ICON Strikers.

I am playing him as alone ST in 433(4) or 4411 formations . I switch those in game depending on my opponent formation type.

SHEVA is a perfect Target man in game. there are several good things about him. (I mention them in Pro's below). But I will point out the most important ones.

Pace feels much quicker than in previous FIFAs and then his stats show... Previous years, he had very slow acceleration and decent sprint speed. THIS YEAR his pace feels quit good and enough to outpace majority of defenders.

Attacking positioning is TOP CLASS. I mean you can see how quick he is to utilize open space in attack... and he knows when to pull back a bit to get a perfect position to score.

Overall his attacking AI is excellent. Comparing to like of Rashford... who makes silly runs sometimes...

Shooting is insane. Seriously. Dont be afraid to take a long shot/ long finesse with him... I scored 2-3 screamers from like 30m.

No reason to mention, SHeva finishes everything Inside the box. Shot power is crazy good. both Feet .

Sheva's physicality is also outstanding. He is probably the 1st ST whose strength stats DO MATTER... He protects the ball and pushes defenders of with such an ease.. SOOO helpful when you need that.

There are also some negatives about this card, and the biggest is obviously 3* skills. It is annoying. If Sheva had 4*/4* he would be closer to CR7 in quality.

Final words, overall SHeva performs very well in game. If I was to compare him.... Maybe (and dont hate me) he feels like CR7 but without 5* Skills.. or Crespo with stronger shoots, better passing, and better positioning. As for his VALUE , I am sure he is 200% worth it. for 400K you get almost a perfect ST with Icon links for team chemistry, and 1,5-2 goals in game ratio. Crespo and Larsson are close, but I prefer SHEVA this year.

thanks for reading this review. I tried to be honest and objective about this card.

I suggest you try him as well, and let me know in comments if you liked him as much as i did ;)))

Sheva is officially back, I got my favourite striker of all time out of Base-Mid icon pack and he has been class for me since with 54 goals in 50 games in 2 Weekend leagues.