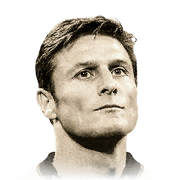 ive been getting a bit of ok pack luck lately but problem is when you have untradeable cards you run the risk of duplicates with nothing you want enough to use them, I’d just got a 50k pack with Kane Casemiro and hummels which is rare to say the least as packs this year suck. I was going to wait till 6 or throw them into lewandowski. Who sadly is so good that card won’t be the highest for long, then the three icons dropped, I remembered 18 and never to do gks, complete waste as they mostly suck. I know vds can be OP but still a lot.

ive only ever used mukiele as had gold then RB card, I avoid the prem. but felt lately that he was bit clumsy and just obviously a CB as a rb and wasn’t working, was falling over getting megged and just felt less effective than day 1. So I decided screw it I’ll do zanetti. Best decision going, played 8 with him div one and fut champs and he’s great, so smooth, great passing, reads the game well, positioning is great, he’s even stopped a few of them awful wing balls, you can easily swap him to cb or cdm and he’d be great there to, I honestly can’t fault him, he covers well, joins attack well, links obviously good and just a great step up that to be honest could last the whole year.

id say really think about icons and don’t just do them, then put more money in the game to the awful company that in a pandemic has shown so much greed, killing league sbcs , pack weight and everything has been a poor show.

be happy, good luck and try and rise above rage.

Untradeable is never good but he’s worth it

First and Foremost, I unlocked this player using the SBC. He cost me around 200K, but will usually cost you around 450 if you have no untradeables.

So, is he worth the coins? Absolutely. I played a 4231 with him and Kante as the CDMs(Zanetti was the more attacking, on balanced not Stay back), and he was absolutely incredible. With a shadow, his defence is impeccable, with 99 interceptions being fantastic when you are looking to win the ball back quickly, especially if you're on press. In terms of a midfielder, I think he's fantastic. His passing is great, along with his physicals, apart from heading, which was a minor issue, but not enough for me to suggest that you don't purchase him. I wouldn't recommend Zanetti if you're going to play him as a RB, solely due to his lack of pace, agility and skill moves. Even with a shadow, he got outpaced by many of the top-tier players, so as a full-back I don't think he'd cut it. I would recommend starting with a 5 at-the-back and then changing formations in game.

His work rates of High/High are also perfect for the CDM role that has a small amount of attacking freedom. He made some great runs into space, and that would often lead to a goal, since he can find a killer pass so easily.

Overall, in my view, Zanetti is a better CDM than Kante. Both are fantastic, but Zanetti's improved well rounded stats and attacking abilities make him a better option, however getting Kante into a team would be a lot easier(Because of the position changes in game that are needed). If you're looking for a RB, I would recommend either Kyle Walker, or Semedo, depending on what you're looking for in a RB, because Zanetti isn't a quality RB in my opinion, he's just too slow and clunky.

-Defending(99 Interceptions with a shadow)