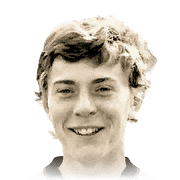 This is it, this is the one I have been waiting for.  El Buitre.  I truly believe that if it were not for my reviews and a need to constantly shuffle coins, that I would have Butragueño in my squad full time all year.  This card epitomizes everything that I love in a striker and for three years running has delivered the goods in my Weekend League reviews.  FIFA 21 was no different as Butragueño combined the deadly combination of Pace, Dribbling, Shooting & Player Architype to a fantastic scoring return across his 20 matches.  In the end, I believe I came to the right choice to apply a HUNTER chemistry style to the Spanish speedster and I was extremely satisfied with the results.  If you read my review on Record Breaker Jadon Sancho or follow me on Twitter: @IVIaeNine you would know that Butragueño paired with the Dortmund man for a few matches before teaming up with Neymar for the remainder of the weekend.  Butragueño slotted in perfectly as the left hand striker in my 4-4-2 formation, punishing opponents all weekend in the following squad: 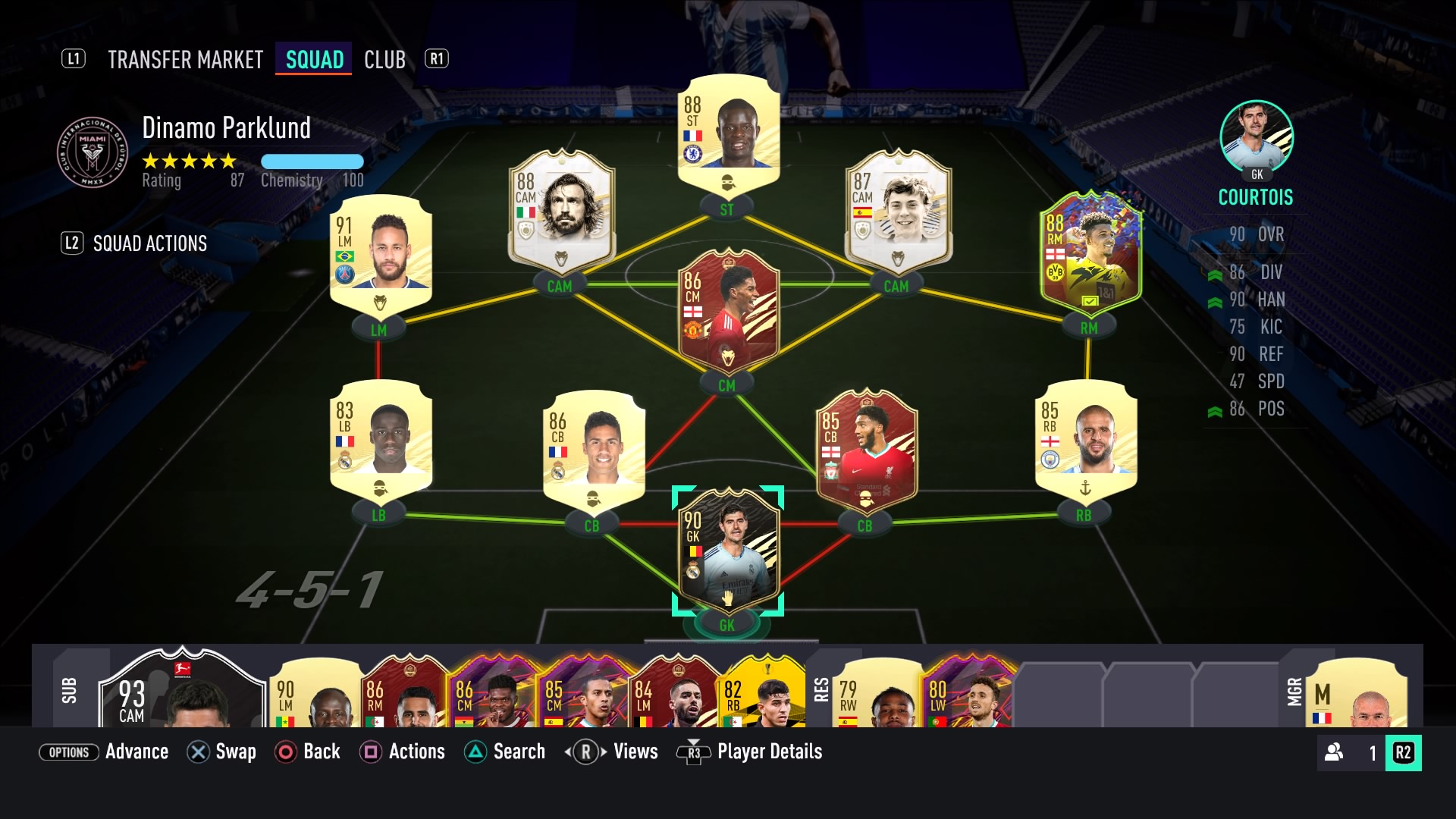 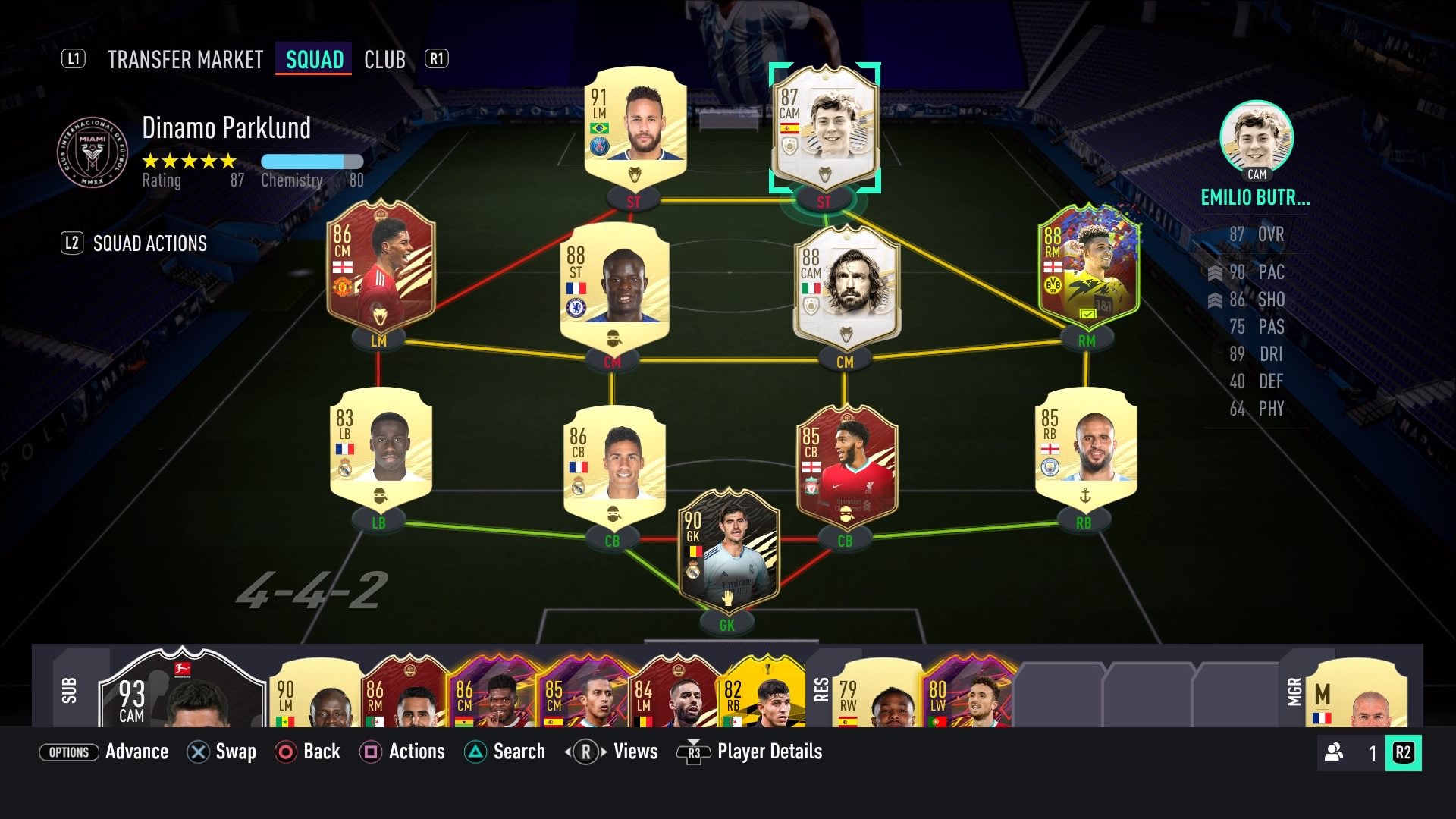 There are times in FIFA when you apply a chemistry style and you wonder whether or not the boost was even applied.  The statistic says 99 but it is hard to determine if there was a notable increase in performance at all.  This can not be said for Butragueño and the Pace boost he received from the application of the HUNTER chemistry style.  Originally I thought it would be best to apply the DEADEYE chemistry for the much needed Passing boost, mixed with the perfect results to his Shooting… and truth be told it went quite well.  However, after one game of applying the HUNTER chemistry style, it became clear that this was the way to go.  The 99 ACCELERATION and 99 SPRINT SPEED on a 168cm (5’6) player was incredible and would have caused defenders issues all weekend by itself… but then there is the dribbling.  88 AGILITY & 87 BALANCE would be a great combination on any player, but with the smaller player archetype and mixed with Butragueño’s pace it was a recipe for some of the most responsive left stick dribbling I have felt in this FIFA.  I realize that the 3 STAR SKILLS will be off putting for some, but it is not a deal breaker for me and I found Butragueño to be an absolute wizard on the ball with his close control.

Lethal. Ruthless. Cold-blooded. Clinical.  You run out of adjectives to describe the finishing with this card.  The variety and quality of finishing that was on display this weekend are exactly why I have always been a huge fan of this card.  99 FINISHING feels exactly as it should and was just as potent on either foot, which is not always the case in all 4 or 5 STAR WEAK FOOT players.  89 SHOT POWER has exactly the right velocity to find the top bins, out of the keepers reach from anywhere inside and outside of the box.  99 VOLLEYS make the double X chipped pass a non-issue to hit first time. While the 95 POSITIONING is evident in the movement and areas that Butragueño finds himself in throughout a match, making it easier to take advantage of his ridiculous shooting.  Honestly, everything about this card was built for finishing and the 31 goals in 20 matches were only hindered by the 10 rage quits during the review.

For 1.1 million coins you are definitely expecting quality and certainly wanting results from your hard earned coins. Butragueño delivers both by the bucket load.  The question here was never really is he worth it, but rather, what else is out there in the same price range?  In terms of ICONs, Stoichkov and Drogba are sitting close to Butragueño and both I am sure offer their own intriguing options.  I have not used either but now I am certainly looking harder at them both, as I would personally like to know the “best ICON for around a million coins” ... seems like a good YouTube series.  Beyond the ICONs there is Neymar of course, who for me just edges Butragueño in terms of overall quality, but can be difficult to link.  Then finally you have the potential for both RTTF Rashford and RTTF Aubameyang … but you won’t see the results for those spent coins until closer to March.  So in the end I arrive at the conclusion that Butragueño is about perfect value, and worth every coin even by comparison.

It was not all sunshine and rainbows with this card, but after about his third hat-trick of the weekend, I started to forgive any shortcomings without much thought.  However, it is worth noting that two weaknesses caused minimal issues throughout the weekend.  One was the obvious weakness attached to Butragueño’s 61 STRENGTH.  Given the pace and dribbling it is quite difficult to lay a hand on Butragueño and more often than not I lost the ball actually trying to dribble through my opponent, not because of a challenge involving a battle of strength.  But the few times I did, I lost them all, and for some that might be a deal breaker.  Secondly, the Passing with this card is just not as crisp as you would like.  Ultimately this is the main reason I mentioned Neymar above Butragueño in the end, as it is truly the only thing separating them.  It was not as if Butragueño was like a fire hose spraying passes everywhere, there were just some instances where tight spaces required pinpoint passing and he simply fell short.

With all of that said and done I just want to double down on how incredible this card is.  I realize that I am eventually going to have to sell this little general, but I am truly sad to see him go.  It is the reliability for me.  There are not many cards in FIFA that are almost a guaranteed thing in front of goal and for me, Butragueño has always been way up there in that respect.  Even better, Butragueño has the guile and pace to put himself in those positions and I am not looking forward to marching into battle this weekend without him.  If you are in the position to spend a million coins and looking for a card that can truly pull your squad forward, look no further ... he may be small, but he is mighty.  Cheers for reading. 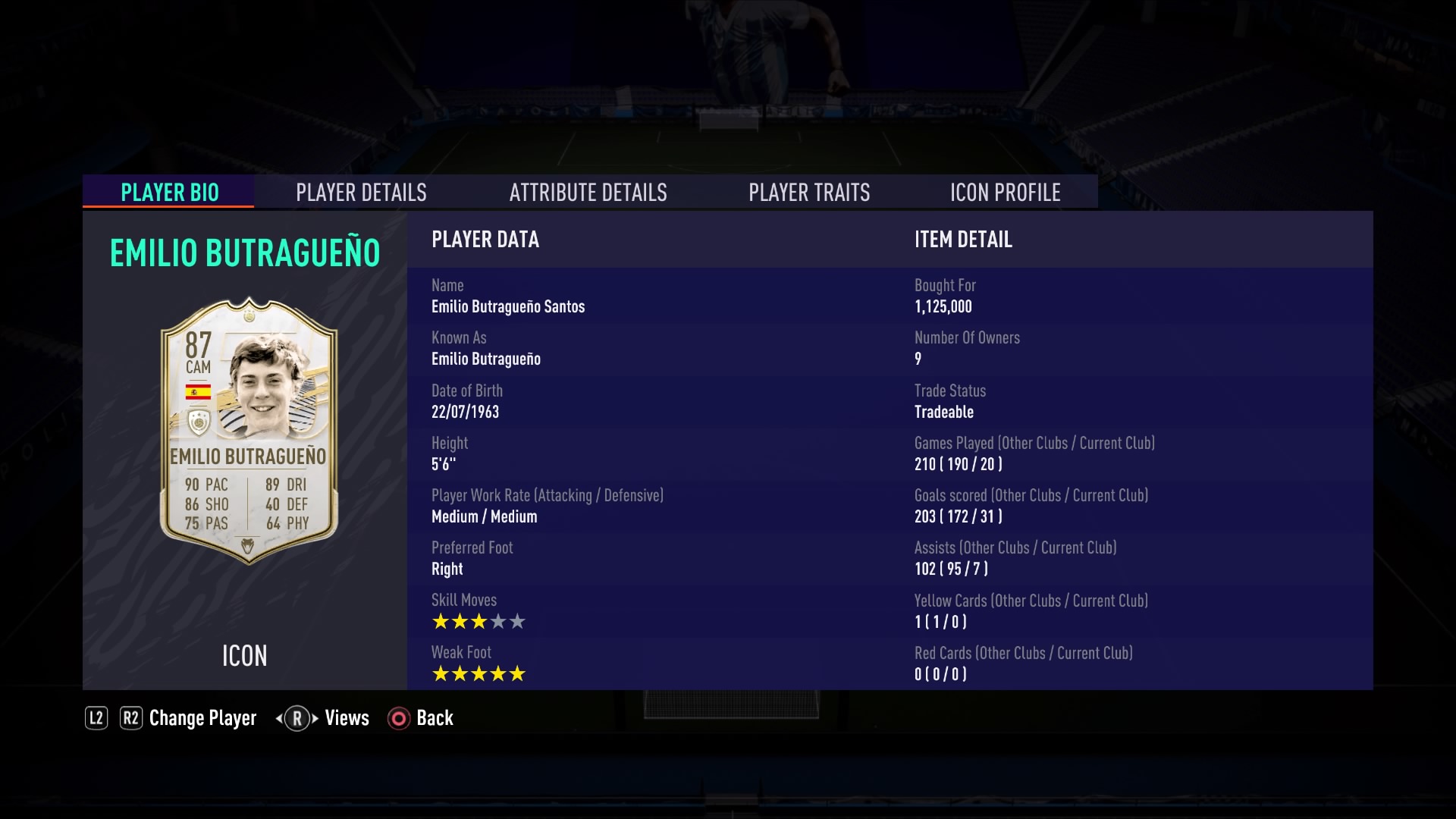 I was torn between Butra and Drogba. Both similar price and I like a big strong striker so was leaning towards Drogba. Ended up with Butra for 920k so snapped him up. Best decision ever. Playing in division 3 and has been nothing short of a monster. Scored a lot. Like, A LOT. Weak on the ball and can not score headers ever, even if there isnt anyone within 5 miles but thats not what hes there for. Link up play is also great. Looking forward to his prime coming out. Defo the best value for coins icon striker at this point in the game.

I started FIFA with tons of luck by packing Kante, Martial, and Mane Trans and Salah Intrans. I had about 1 Million coins and decided to buy Butra because of its 5 weak foot. I'm not that much of a skilller but with this card, you don't need skills. This card with a hunter it's just a killer 99 pace and 92 shooting he took me to 17-11 in the WL with about 4 90th minute losses. In the first WL i played with IF Ben Yedder which is really good but doesn't make a big difference, unlike Butra which completely destroys players such as Van Dijk and Varane.

I would totally recommend you to use him if you have the coins now that it can really change your teams' form.

You can find me as https://www.twitch.tv/elwow_gaming on twitch.

Hope you can find my review helpful, have a good one.

I was very relunctant to do the base icon sbc but got pressured into it by watching all the sick packs. I was doing my roulette and went through all the sick ones. I thought about spanish striker and I was thinking yeah if it butra instead of torres than it would be sick. I knew butra was sick(I do like to watch McJell) but let me tell you that he went beyond my expectations. First weekend league with butragueno and he scored 44 goals and got 13 assists from the striker position is a 4-2-3-1. This was in the gold 1-elite 3 range(I am not the greatest player but not bad). I had him on stay forward and get in behind and let me tell you that he was INCREDIBLE!!!!

Pace. 90 pace plus the hunter chem style( which is the chem style I would reccomend). He made incredible runs in behind and got past even the quick defenders of varane and gomez.

Shooting. Inside or outside the box, his finishing is just elite. Barely misses any chances and is a lot more reliable than the RTTF Promes that I used in the weekend before.

Dribbling. The stats don't do him justice. Even without a finisher or engine, he felt very agile(probably due to his 5"6, smaller frame) and his ball control and dribbling are elite.

Passing. Even though his passing stats aren't the greatest, I had no problems with his passes. Obviously as a striker I wasn't sending long through balls and making a ton of passes with him but when he needed to pass, they were good.

Price: Compared to many other strikers in the game(specifically icon strikers) Butra is great value for coins.

3 star skills moves. Probably my least favourite part of the card and it is why I wasn't completely sold when I first got him. I do like to have 4 star skill moves and having 3 isn't the best but I worked with it and honestly with the pace and dribbling, I didn't even notice it that much.

Low Physicality. His low physical stats did mean that he did get pushed off the ball a decent amount and he isn't going to be winning any headers but if your buying him for the physicals, than you are already doing something wrong.