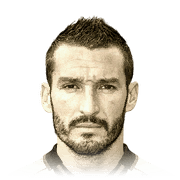 His pace is extremely good for a centre back

Is very good at interceptions and tackles and AI blocks

Has mbappe and ronaldo in his back pocket

Would recommend, much better than headliner diego carlos for someone of a similar price

Price (although he is worth it)

Doesnt score headers at corners but can defend them

I've always been a fan of Juventus so I had to try this beast out. But is he better than Mendy, Lima and 87 Ashley Cole?

Well, he feels quite good on the ball. I used him as my "stay back while attacking" and he was back most of the time but he pushed higher sometimes because of his work rates (H/M)

I tried him on corner, ok corners, nothing special with that.

When that is said,

I felt a bit "behind" sometimes, but he also saved me inside the box sometimes.

Although I do not think he's better than Ferland Mendy compared to the price, but he is better than 87 Ashley Cole.

So I originally had used mendy in fut 21 because of how overpowered he was, and even though I liked him, I wanted to give someone else a shot to see if they could do an even better job, so I then decided to look at any icon left-bakcs and I found zambrotta and I really liked his stats so I gave him a try. I gave him a shadow and with already good pace and defending he became a perfect Left-back. He already has good physical so he can get defenders off the ball well and can hold on to it. Hes honestly way better than mendy and for me the best Left-back in the whole game and for just about 400,000 coins he is worth getting.

He is very fast so he will be able to keep up with fast players like neymar or Mbappe.

He comes in clutch at moments when you think you're doomed

He has 86 stamina which means he can easily run up the pitch and track back as easily.

He can pass the ball really well and has good ball control which means he will sometimes start plays.

He ha good physicality which means he will be able to hold on to the ball and push players off the ball.

For me he is the best left-back in the game, so if you have about 400,000 coins then get him because he can save you in weekend league.

His shooting is poor, but he's a left-back, so you're never going to need him to shoot