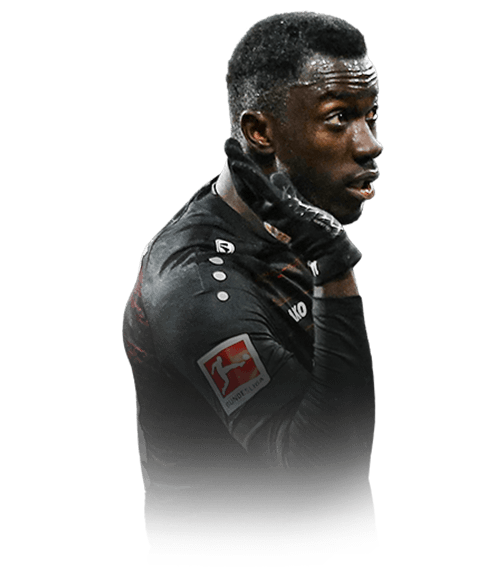 I was really excited because it was almost sure that he would be in silver stars and the day has finally come, and I will tell you something, he didn’t disappoint at all, actually he is really good. I use him as a striker because his passing is quite low, but finishing he is an absolute beast and he is really fast. With only checking his stats you can get an idea of the beast he is, but you have use him, it’s really fun to play with and it’s free, you only have to win 3 matches.

I tough he would feel kinda slow because he is really tall, but it’s like Haaland, he is tall but actually feels really fast in game, and with that beautiful 99 agilty. He outpaced lot of defenders including Varane

Also something amazing that with finisher he has 99 finishing, he is an absolute banger when he is close, he has 90 positioning, shot power and of course his 99 finishing, But as I put that’s only at short range because he doesn’t have the greatest long shots... he has 59 but just don’t make long shots and he will be a beast. Also something that affected was his 2* wf. Kinda feels like 3 but still a con

He might not be the best passing, but if he had good passes he would be an absolute free cheat code. So being honest he doesn’t make the best passes, specially long ones or passes with wf, try to make short passes with him and it won’t affect so much

Of course his main stats are his 99 agilty and 99 dribbling, but he sometimes feel a bit clunky because of his height. But something that really helps and make this card a beast and fun card are his 5* skills, just imagine humiliating top class defenders with a silver card. Well that’s exactly what Wamangituka will do, you have to get him, you won’t get disappointed.

He has decent stamina, could be better but with stay forward he shouldn’t get tired so much and he has good strength plus he is tall so it will be hard for defenders to body him

He can even take penalties

I played him as a second striker beide Joao Felix Potm. Linked him with freeze Bolasie and an Icon. He is amazing. Feels so fast ingame and finishes everything.

Maybe 2* WF but he even scored with his left

Stamina. You can play 90mins, but not longer

Well when this new silver stars card dropped, I knew it had to be done. I saw the challenges and I thought that it was too good to be true. I completed him in about 45 minutes, using the regular silver Wamangituka, and he was also brilliant. I knew that this had to be and upgrade. Let me tell you, he didn't disappoint. I used him in a 4-4-2 paired with Vagner up top. 96 pace is outrageous, and can beat anyone in a foot race. I used a deadeye on him, to up his shot and passing, and it made a difference, 88 shot is brilliant for a silver, and does more than enough. His passing isn't great, but it gets by. His dribbling for someone as tall as him is really good. His physicality is decent, and will muscle smaller players off the ball. His 5* skills are so fun to play with, and his 2* wf has scored a surprising amount of goals for me. I use him in my Bundesliga Icon Swaps, he's that good for me.