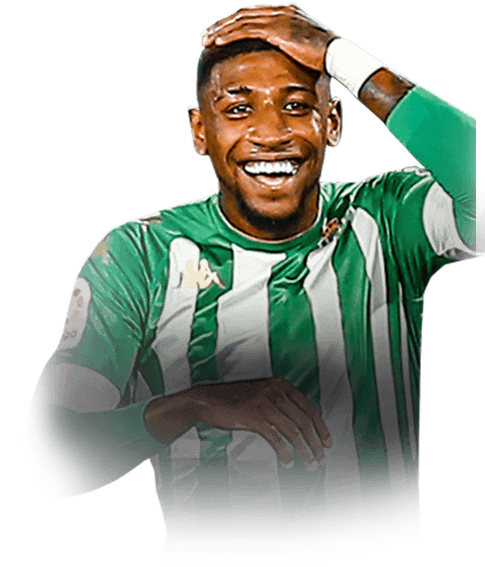 Hi, first of all, I want to apologize if my english is not so good.

At first, I was worried because of the work rates but it was not a problem. I use him at CB with sentinel.

Just enough for a CB, he can catch the players who run away with thoughts balls easily.

I never shoot with him, I feel silly to rate this in a CB.

He has a nice pass to be a CB, maybe sometimes where a bit slow but I think that is cus of the game and the servers.

I was using Diego Carlos (83), and I notice a lot of the difference here between both. Maybe sometimes fill kind of slow, but it's not any problem.

Wherever he put his feet, he gets the ball. A BEAST for me, he can do any tackle, from the back, side, or front, it's doesn't matter. He has a great presence in the box.

The only problem here was he's looking, maybe if you compare it with Diego Carlos doesn't feel too big. Anyway, he's is a beast.

To sum up, I know that there are better CB in LaLiga, but if you don't want to spend too many coins or you like using objectives players it's perfect for you.

To much time to get him

He's looking in the field

Hi guys, this is my first ever review on Futbin, I hope you'll appreciate it.

I'm a division 2 / gold 1 player, still trying to reach that impossible goal, which is Elite.

This campaign started very well, as I went 12-3 and the squad was like one of the worst I used till now, cause I like to change my team every week in order to prove most of the players of this toxic game, just to have more fun.

So, I got this guy last week and I used him during this WL.

I applied anchor because I used him RB in my 4231, with the istruction to stay back (I wasn't too worried about the workrates, cause his stats were amazing to me as RB).

He's very very fast, not many players could pass him.

As he had to stay back I needed from him only short or easy passes, and he could manage them very well. However sometimes I used him in the offensive phase and in answer to that he made really nice crosses for the striker.

For a RB he has enough dribbling so you could pass him the ball, turn easily and feel comfortable without loosing the ball, he's really agile for a RB.

Very very good also in this aspect, very strong in the contrast, nearly nobody could pass him and if they do, he can recover them easily thanks to his pace.

He has the lean bodytype, which for me is a synonim of not strong players, and so it was for him. He's not that weak, actually he could control the wingers, but if you have to face a very strong striker he could be beaten. He's very good with headers, both in defense and in attack.

Bonus tip: I scored 2 headers with him from corners, so bring him in the box!

He's not the best RB in the game, but in LaLiga and for brazilians you can't find better RB right now, so if you have chosen him last season, you made a good choice in my opinion.

So I was excited to get this guy, I have HL Diego Carlos and freeze firmino so got him for this weekend league, I play stay back with full backs and obviously his work rates were a concern but I used kurzawa and I found him to be excellent so wasn’t stressed, this guy is awful, he’s weak, he gets caught out every time, for some reason he kept coming central, he turns awfully and has that awful glitch pass where it rolls In front of you instead of an actual pass. He’s not fast, even with a shadow, there’s nothing good about this card, wouldn’t risk him at cb in a two, the only possible use would maybe be a 3/5 back but I just wouldn’t, the stats are just not accurate, he’s just bad at everything, passing, movement, tackling and positioning, he’s just poor, I’m elite 2 div 1 around 2200 and he is the absolute worst full back I’ve used in any fifa

feels clunkier than both mukiekes

slower than zanetti with 83 speed

Worse than level 15 aidoo and Duncan,

not worth the time

everything you need a rb to do

Feeling gutted to not have chosen pulisic