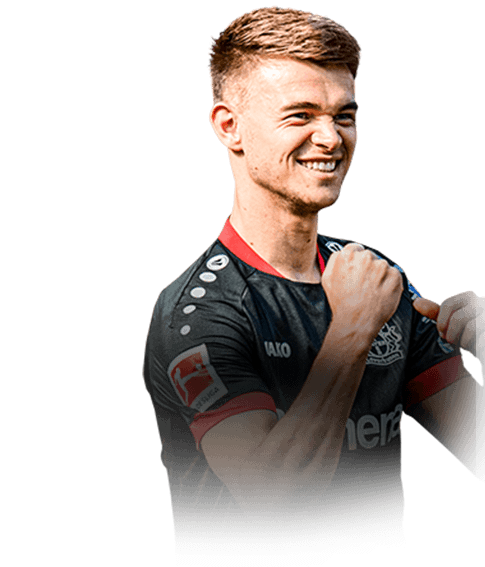 Finally more free cards, which I love as my wallet is asking do help for making too many SBCs. After some hours I was finally able to get this free beast, I did him only because he is free and looks nice but he doesn’t really fits my team and I already have Acuña. He only links to Klaiber but for not messing my team, I will just keep him as a sub. It’s a really great option, specially if you have a Bundesliga team, as Alphonso is really expensive and there were no other great LBs. He isn’t so hard to link but it’s hard to get a strong link, besides Diaby, you can’t have another decent green link unless you use him at 7 chem. A great card and the best thing, it’s free. I know it takes its time, something it can even be a little frustrating as there are some people that are toxic even at friendlies. But just try enjoy friendlies as it’s the game mode where you can finally rest of Weekend League.

Felt almost as fast as Davies, and of you add shadow he will probably feel even faster. But the phisicality upgrade its important so anchor is the ideal. He isn’t so tall or short so he felt really fast, enough speed to reach any striker, literally.

Of course didn’t expect him to be great shooting. But he hasn’t got so bad shooting and could work as a CDM

Great passes, even better than Alphonso’s. He has balanced stats, can make long and short passes, can cross, can make flair passes. I really like my defenders to have great pass so that they don’t give it to the opponent by making a bad pass. Even his 3* wf didn’t feel a lot, only at crosses but that’s why he is LB not RB

Really nice, and again probably even better than Alphonso dribbling. I would say he is almost as his level but of course Alphonso is expensive because he is likely getting lots of upgrades. Not talking of this man they were great, to start he has 4* skills which is nice, not necessary but can be fun. His agilty was noticeable, he broke some ankles. His reactions are really good too and has flair too

Its just as nice as his dribbling, totally insane, whenever they tried to pass by him, he absolutely destroyed strikers. Now that was sometimes a problem as I feel like LBs or RBs don’t play too much. I rarely see them making plays. Anyways really great, could have better defensive awareness, but it’s nice and again I say it could be great at CDM

Really good, he is really complete and with anchor he is quite strong. Aggression helps a lot as 80 is not bad but still some players could pass him if he didn’t have that aggression. Just a little problem would be Stamina if you use him as Midfielder but again LBs don’t really make too much plays at the game, so he won’t get tired

Great passing, even with wf because it doesn’t feels too much

Dribbling is crazy, absolutely insane for a defending

Phisicality is good with anchor

Agility and balance are great

Can take a lot of time to get him, but it’s really worth it

I did this SBC as I were looking for a new formation after I completed the Tavernier SBC as I wanted to play him a little further up the field. I used Freeze Traore before als LB linking to Prime Hierro. At right centre back I played St Juste on 8 chem, but after this Sinkgraven coming out, I needed to do him as he looks like a great LM for the 3-5-2 and so I could play Tavernier RM.

So, Sinkgraven: great player, but stamina is a minor quibble. It took me like 3 hours to complete him so not bad at all. Just make sure you do all the goals fast, and then play golden goal, most people seem to do so. Sinkgraven is very agile, super quick, has an amazing left foot and his passing is incredible. He is not the strongest, and his stamina can let him down a bit, as in 3-5-2 he has to cover the whole left side of the pitch. So after 60-70 mins I had to sub him off for Traore. However, most of you will play him left back probably, so especially on stay back his stamina will be more than good. I used an artist chem style, as a defender I would recommend sentinel to improve his strength and defending mainly. All by all, I am extremely happy with this card and my strong link to the best cb in the game, st juste!

I expected him to be good, but he was better!

I used him in a 4-4-2 with stay back at attack, so I can´t completely review his crosses or shoots.

but his passing in my build-up play was very consistent, he rarely missed a pass, what is very important to me.

So logically his main task was to defend against all the pacy wingers, and what should I say? He was incredible.

Maybe it´s just a mental thing but I play all my defenders with a shadow, maybe sinkgraven doesn´t need one, but he´s incredible fast.

He really didn´t failed to catch up with anyone. Same to say about his definding, really good and luckily he is also very agile, which makes him a really strong leftback.

I played Mendy and Davies, and all in all I dare to say he was better than both of them (sorry to all the mendy-varane addicted guys....).