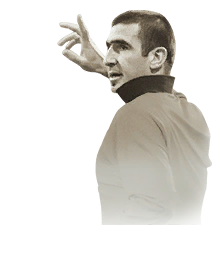 I fell in love with his Mid card earlier this year and after 500 games of dedicated service to the club I finally replaced him with the only card fit for the job - his prime moments. I've tried several other quality CAM's and ST's however my team just didn't seem to click without him. This card is truly one of a kind and for me personally worth every coin spent.

In a dribbling heavy meta, a 6'2'' High and Average BT striker seems like a death sentence. And yes, he doesn't feel like TOTY Messi, but he brings so much else to the table that make him an indispensable part of my squad. If you're used to little dribbly attackers this card will take a while to get used to, so here are some tips I've found to get most out of him.

With this in mind, here are some general thoughts on his stats.

Shooting (10/10): I've tried out lots of lethal finishers however this guy is just a step above (up there with Eusebio IMO). Brilliant in the box, brilliant from range, and while he doesn't have the finesse shot trait he definitely has that "whip" as NRTFM likes to say. Weak foot also feels like a 4.5* rather than a 4*.

Passing (9/10): Not quite TOTY De Bruyne level but still insane passing on the lad. He will raise your standards for the passing levels you want on an attacker.

Dribbling (8/10): The high dribbling stat goes a long way in making this guy feel better than you'd think. The 5* skills are also crucial in manoeuvring him around. Like I said, don't expect TOTY Messi but he's actually very decent on the ball considering his size and the skill moves will help you beat defenders.

Defending (5/10): He'll make a tackle or two because of his physical presence but please don't pull a Nepenthez and start playing this guy as a CM.

Physical (10/10): Absolute monster. Bodies pretty much everyone when breaking through the defensive line or skilling past a defender (scoop turns are OP with him). He's very difficult to dispossess and can hold the ball up really well in the midfield. Brilliant in the air as well. He'll genuinely make your opponent regret using a 5'9'' fullback at CB.

All in all he's one of a kind and for me worth the 3mil I spent on him. There will be other cards that are probably better value for money, but none that would really replicate his presence. He also will probably continue dropping in price but we're at the stage where cards will drop in price until the end of the game. So if you see a price you like, get him and have fun, you won't regret it.

Background - I'm in Div 1 2200 SR, regularly Elite 3/2 player so that's my perspective in terms of completing his SBC.

He's not the meta god. He's a bit clunky, as you can tell from his height, body type and agility/balance stats and even if you put hunter to max his pace, he doesn't have that "I've been shot out of a rocket" speed that an Mbappe or even a TOTS Vazquez feels like in game. At a full sprint in the middle of the field, even though he has high aggression stats, he doesn't necessarily have that "ball stuck to his foot" trait that Neymar and Ben Yedder have.

BUT - everything he does is strong. There are 5 ST/CF that have 90 base stats for all the categories but defending. They are TOTS CR7, Benzema, Suarez, and Lukaku. The difference is that Cantona's body type, 5* skills make him a freakish cross between Lukaku, Suarez, and CR7. He's got Lukaku's brute strength where you can just hold L2 and shield the ball and not get bowled over 95% of the time. He's got Suarez's playmaking abilities with his passing, dribbling with his back to goal, and set pieces. Then he's got close (but not the same) to CR7's skills and finishing in the box.

He is the complete striker for those who like build up play and need help breaking down teams around the box. He is NOT the through ball merchant that a majority of FIFA players use to play with. There's just something about his body type where he doesn't necessarily feel "fast" even though his stats are maxed. And because of the aforementioned 'clunkiness', he does take some time to get used to how he moves. But if you're someone who can build up properly and use those 5* skills, then there are very few players like him in the game.

Whatever you need to do, he can do it. Win a header? Done. Hold up the ball? Done. Cross field pass or a double tap to squeeze it to your strike partner in the box? Done. Finesse, the FINESSE, from 35 yards out? Done. Ball roll scoop to get some space? Done.

There are still some negatives though. In bad gameplay/connection, he suffers. Just doesn't have that left stick dribbling responsiveness. His shooting is great, but he has a long shot animation because of his body type and feel like he gets blocked more than others. Compare it to CR7's where there's little back lift to the shot, and CR7's gets blocked less often. So there are some negatives there but that's only because I come up against 20m teams when I'm trying to get elite 2/1 so you notice every little thing.

So all in all, would I recommend him? Gun to my head - I'd say for most people - no. There's cheaper, less club draining options than the King. He won't fit into everyone's playstyles and if you have a middling to bad connection (40 ping or higher) - then you're going to wonder why you completed this guy.

But, when you need that big of magic to break down the horrid 532 or two banks of 4 in a 442, there's few that can do it better than the King.

Since EA annouced Cantona I was stocked and a little bit skeptical about how he was going to feel in game and oh boy he's on another level.

Cantona is a top tier icon no matter the version. His baby was one of my favorite cards at the start of the game and I always end up coming back to his cards.

This Icon moments version is comparable (and better in my opinion) to 94 R9, TOTY CR7 and players of that caliber. making him one of the best cards that you can buy in this game and even though he's 5 million in the market I can recommend him 100%

Maybe Price and Body Type in some cases.