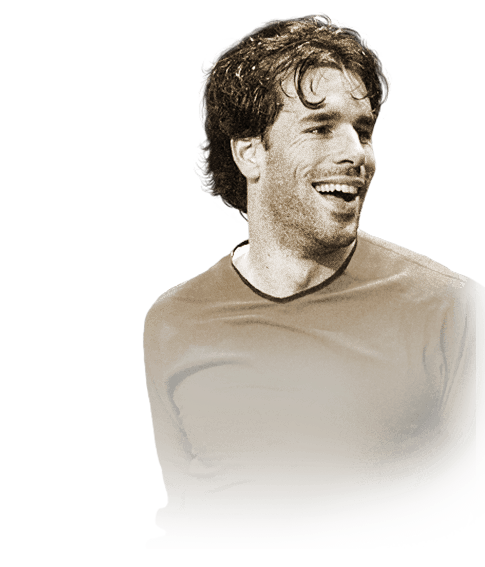 I was excited to try him out when prime moments came out. I stopped playing FIFA for a while cause I just didn't enjoy it anymore.

I was div 1 with +- 2000 points but was finished with the tryhards. Finished with everybody playing left/right backs at centre back.

So I decided to start playing with my childhood hero. At first, I used an engine on him, as everybody would do.

However, I felt like it didn't help that much. He wouldn't outpace defenders he wasn't

suddenly Dalglish with all the balance and agility. so I just boosted the stats in which he already excelled.

with this mindset, let's jump into this review.

His shooting is out of this world. He scores absolutely everything that should go in.

pope inf looking like kepa. Asides from his ability to score with his foot he can also score headers. That is the dream.

His passing is in my opinion the most disturbing thing from this card. sometimes he misses a critical pass which

costs me a goal. However, why would you need to pass with a guy which makes goals for a living?

Just pass the ball to him hold L2 and score. Simple as that.

Of course, he has low agility and balance. I'm not going to say he doesn't feel clunky at times. But when using the L2 button he can hold of any defender.

Due to this he just takes the ball and scores. with his ball control, his first touch usually is amazing which already provides enough handling to shoot and score.

he thrives like I said on his shooting and physical. he has a lot of strength which leaves every defender stranded.

Also, his aggression makes varane run back to his leftback for help.

Overall he is a true gamechanger which

makes the game fun again. Like I said he is no mbappe/rashford or any other meta player.

But when everybody is playing with pace you can’t fight it with more pace.