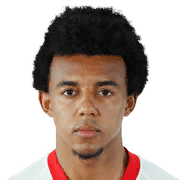 Whats up everyone! I use Koundé for my RTG, which happens to just be untradables and a few cards I packed using coins. I got Koundé in a pack a little while ago, and I was like, "eh I guess he might be ok" because he has insane RTTF and in-form cards. Its safe to say he was a little more than ok. He was literally a brick wall. If you know how to defend, (L2 while closing down players, dropping with cdms, not lunging, etc.) he is very hard to get by. Worth the coins 120%. I would even say he was better than lenglet for me. Use either shadow or anchor (I prefer anchor). He is so cheap and linkable, that I think he is the most underrated cb IN THE GAME. He would partner Varane very well!!

Speed (with anchor he feels way faster than 82 pace)

Passing (for some reason its actually good! in nine division 5 games he has never given the ball away.

Dribbling (when under pressure, a little ball roll and acceleration and he is away)

Physical (beast! everything but stamina)

Its a great cheap alternative to lenglet.