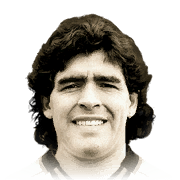 What can i say, he is the reason i have fun playing this game again. I only played Fut Champs week after week because the gampelay was depressing and wasnt that fun to play. When i bought 95 maradona i expected him to be a fun card to play and hes exactly that. He´s the most fun card i played with. Yes of course he isn´t the most meta player, he will miss a shot now and then so i recommend to have a good striker beside him, like eusebio or dalglish, but he has the most insane dribbling in Fifa 21 and very good passing so you can have some real fun with him, especially if you skill a lot (5* skills).

The most important part playing this card is to have fun with it. He is not going to help you reach elite 1 (3* weak foot/ 75 stamina)

All in all just buy this card, if you liked maradona in real life, if you want to have a fun player with insane dribbling.

There is not much more to say about this card, he is amazing if you adapt your playstyle to him!

best dribbling in the game(prime even better)

defenders have a headache after guarding this guy