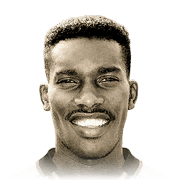 What can i say for this guy, he's simply op in ST position. He's insane speed, high agility and dribbling makes the ball stick to his feet. He's finishing stats are a lie, he almost never miss in 1 on 1 vs the keeper. His long shots are also really good. He can compare with Neymar and Mbappe, only downside is his stamina, but he always last 90 min as ST, but if u go in 90+ you need to replace him. I tried him as RW, but he'...
Read full review

as a nigerian i have to cling onto him as our only icon and we also dont have the national team and kit on kick off. prior years he wasnt that good so i figured id try him this year. hes pretty damn good, there isnt alot of good circa 500k right wingers around, or even mid level ones salah messi moura and bale come to mind. for the money he has better weak foot than salah, betetr skill moves than messi and links to everyon...
Read full review