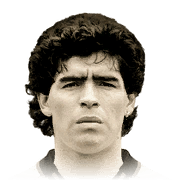 Good but not good enough for the price

Used him as an attacking CM and ST with Pele and R10 next to him. His body type, height and balance really improve his strength especially with a hawk which was a great positive tbh it feels more like 90 strength. I love the way he does skills and moves with the ball but his 3*WF and workrates let him down and ruin the card for me. Save 2 mil and get the mid if you want a Maradona.
Read full review
0
/600
Click here to verify your account in order to comment Update my avatar Dos and don'ts
Top Rated
New
Controversial
Show comments