Last night I wrote a review about Vidic and I actually really enjoyed it so I decided to write one again for one of my favourite players on the game. I'm a division 1 player between 2250 and 2350 skill rating with an average of 24 wins in the Weekend League. Last week I played with CR7, but the team around him was really poor because I spend all of my coins on 1 player. This week I decided to get something new, something a little different.

I was just looking on the market for some strikers and there he was, Davor Suker. I took a look at his stats and I was wondering why he wasn't more expensive. Most of the time this means he isn't meta or just not as good as his stats say, but this time this wasn't the case.

So far I've used him in 15-weekend league games, he scored 39 goals and assisted 8 as a lone striker in the 4-2-3-1. In rivals, he got 80 goals in 24 matches, but that is because of force-feeding. I wanted to do as much as possible with Suker to find out his pros and cons, which I've definitely found out in the 39 games I've played with him.

I can't really find a player who plays like him, his dribbling is very agile and fast (speed dribbler trait) and his finishing is absolutely ridiculous with both feet. The body type is a bit like a Rodrigo (Leeds United), feels very agile and fast. Another outstanding point of him is his passing ability, I always like it when my strikers when they are good at passing. Most of the time if you want a striker with good passing you need to get someone with a little less shooting or pace, but Suker has got it all!

I hope this review will help you to decide whether you buy him or not. I will definitely give him a chance!

Good luck with Champs my friends!

Pro 1: His shooting is out of this world, inside and outside of the box.

Pro 2: His dribbling feels very agile, always has the ball close to his feet

Pro 3: His traits, which are chip shot, outside of the foot and speed dribbler are all 3 very noticeable in-game. Since chips are nerfed I have a really hard time scoring them, but not with Suker!

Pro 4: His penalties are very good, even when the keepers dive to the right corner he manages to score them

Pro 5: His finesse shots outside the box. Just like a prime Messi IRL.

Pro 6: His preferred foot. Not many people will know that he is a lefty so you can surprise them with turning to his left.

Pro 7: His weak foot, very solid, will score plenty of goals with his right foot.

Pro 8: His passing, for a striker is phenomenal.

Con 1: His physical isn't the best, but he isn't the tallest and strongest so what do you expect?

Con 2: His heading ability isn't presented in the game.

Con 3: His finishing can be a little inconsistent, but he will never miss more than 1 or 2 chances. 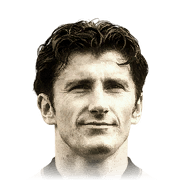 This card impressed me al lot!

This is for the people thinking of getting Davor Suker.I played this week rivals with his baby version, the card it felt so great , the feeling , passing , shooting it is just insane. After rivals i bought his 87 version , after 7 games with his 87 i felt like i need to let the people now not to sleep on this card. I’m a division 1 p...
Read full review

A bit about me before i start this review. Im a div 1 player with 2100 skill points, and got 23 wins in fut champs this weekend. Buying suker was probably the best thing i done on this game. Absolutely amazing card. I played Div 1 vsing the likes of pros and 5 mill plus teams and played my last 2 games with him of fut champs to get me the elite.As you can see by the squad aswell. I dont have the best team ...
Read full review

This card really surprised me. I was looking for a ST to pair with POTM Joao Felix in a 4222 ingame, and had a 500k budget. I was interested in trying him because he was a new icon, and looked pretty good. From the first game that I tried him, I fell in love with his card. His shooting is unmatched, better than mbappe and other top players. I couldnt belive it. He is going to be staying in my team for a long time.
Read full review
0
/600
Update my avatar Dos and don'ts
Top Rated
New
Controversial
Show comments