Sooo, who wanna play with the same boring team every weekend league, and use the same players you come up against?

Aaaah yea, pretty much everybody, who sweat this game, and tell you how much they hate the game play, but still play with a boring team, to get some rewards, so the can buy other boring players and sweat some more.

Well anyways, i like to try new players all the time, so i gave this guy a try.

And wow, he replaced Mané, so for a liverpool fan, thats was some big shoes to fill.

I also had a Neymar to try abit before Mané.

So i play 3412 most of the time, i tried Nedved as a LS, with my RS being Mbappe (to try him out aswell) And even know, i normally get the most goals with the RS.

And Mbappe isnt to bad, i actaully had more goals with Nedved, he is just always there and it fells like he is a ghost sometimes, that he can just go through players and come out with the ball on the otherside.

Looking at his stats its not that impressive, but in game he is really good, his shooting is sick. one of my favorite finishers.

i have Hunter on him, but even his dribbles feels alot better than it looks on the card.

I tried him as Cam aswell, but in my 3412, the Cam com back alot and almost becomes a CM, so its abit of a waste, he still made som good runs from there and scored tho.

Try him out guys, he is very good.

dont let the stats scare you, and all the self proclaimed Traders that keeps telling you everything will drop in price and you should use a cheap team until August, when the game finishes, and you dont wanna play anyways.

Doesn't keep the ball as close as Messi kind of players.

He is a LW like everybody else in this game. 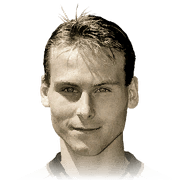 Sooo... Welcome to my review to this amazing czech fella! First of all I have to say that Im Czech myself so it was not hard to spend 478K on this beast. However I had these sympathies for ma guy he was still able to surprise me! I played him in 3-5-2 formation as a ST and he was phenomenal. This guy can do it all shoot from distance, outpace defenders and balst it in with left or right he do...
Read full review

I packed Nedeved out of my base icon pack in swaps. At first I thought it was a massive L until I saw his stats. It blew my mind 5 star 4 star high medium, I was amazed. I decided to use this card at LAM instead of my potm bamba and that right decision won me a lot of games in division 2. 7 games played, 11 goals and 2 assists. His finishing was top notch, he scored anything he could, The weak foot played a massive part in ...
Read full review