After Purchasing this card for 1.2 million coins in week 1 I had high expectations, however luckily this man did not disappoint. As an avid Del Piero fan from previous FIFA titles I was left disappointed during FIFA 20 but let me tell you FIFA 18 Del Piero is back!

He feels faster than his card says let me say that straight away, he beats most defenders with ease and only really loses out to the really fast fullbacks. Overtop the through balls work nicely for him to run onto. Anytime he pressing the CB's I'm comfortable he has the pace to beat them.

Once again his dribbling feels great, he can effortlessly perform most skill moves at a high level. Partnered next to Neymar you see a huge difference in the agility but in terms of execution I cannot fault Del Piero. I have ruined so many defences with simple spins and flicks.

This is where in my opinion this card excels, he can make some of the most ridiculous passes in some of the most challenging situations. I have used quite a few cards with incredible passing stats this year already, like Pirlo, but they just don't compare. Lobbed passes and through balls are inch perfect and his assist record backs me up here getting an incredible 21 assists in 10 division rivals games!

Once again his ability to score long distance goals returns, he is surprisingly good outside of the box for me and obviously on both feet with that 5 star WF really coming into play. Not only is it his ability to score outside the box but his incredible dribbling attributes and pace allow him to get 1 on 1 situations often. He is so so composed in front of net, I have 100% belief every time that he will score. It does not matter which foot it is on he will place it into the back of the net nicely. I'm only hesitant to not give him 10 because sometimes on a close range volley he has a tendency to hit the woodwork, however 9 times out of 10 he'll bury the rebound. His volleys in general are also a massive positive scoring several with him now.

A card with a medium defending workrate I often utilise him as the first line of defence and obviously with 42 defending he misses out a lot but quite surprisingly he will win the ball back a few times a game. Also if dispossessed he can often will the ball back. I'm pleasantly surprised by his ability to defend.

His stats don't lie here, he isn't a physical presence but he often has enough strength to hold a player off when either passing or shooting but think his high composure is what allows that, I do think it's not awful when pressing a defender and tackling often managing to shrug the defender off the ball. It's good enough that you won't feel like it is an issue with this card, I haven't found him particularly weak nor strong. His stamina is good.

Overalll I would say this card is one of the best cards in the game as of right now, it's hard to find many real weaknesses and even here I've had to be harsh. He is a game changer for me, dominating the attack and being they key piece of the puzzle within my team. When it comes to Monetary value, I would say this card is very worth it at 1.2/3 million and is probably the best CAM/CF under 2 million coins. I thoroughly enjoy using this card and I think del Piero will stay in my team till maybe the end game. 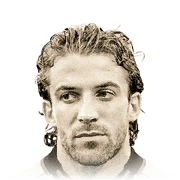 Let's keep it quick. He was my second ST in a 4-4-2 or my CAM in a 4-2-3-1. Brillaint, not amazingly quick on the break, but his close dribbling and technical abilities are A+. As a ST or CAM he is perfect, well recommended and will assist and score loads. Deffo worth a try and the 5* Weak foot is something to die for in this Meta driven game.He's fast enough, in front of a CB his pace will do, but you nee...
Read full review
0
/600
Update my avatar Dos and don'ts
Top Rated
New
Controversial
Show comments