Very quick but not the quickest. Sometimes you can feel that 82 pace but personally i don't feel it that often.

Best passing I've ussed so far. Nothing much to say here. Just look at those stats if you don't belive. 90 passing...

Outstanding dribbling. Maybe you'll be worried about that 79 agility but let me tell you something... "Don't Worry... Be happy!" If you question what it means it means that his agility doesn't feel like 79. With a finisher it feels like Mbappe.

Just like very attacker i review, i give him an N/A cuz he has 41 defending and it doesn't matter as an attacker.

RoberTo Baggio isn't really a physical player. CB's bully him. His 70 stamina may be sometimes a problem but now as EA removed fitness cards it's not really a big problem. Think of him like a Ben Yedder. Stay Forward! 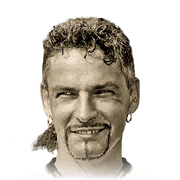 I was lucky enough to pack baggio out of the season progress rare gold pack and oh boy is he good. Although his pace looks bad it feels more like 87 than 82 but his 5 star skills help that as well.I play him at cam in a 4-1-2-1-2(2) and his passes and runs are INSANE. His shot power power is only noticeable every once in a while but his shot accuracy easily makes up for it. The only problem i have is he gets pushed off the...
Read full review

HEY, I was lucky to pack ROBERTO BAGGIO 89 from my 25k pack. I was already shocked, so I decided first of all- before selling him, I must check if he is worth 600k?I didn't played many games with him, packed him today ;).I use him with hunter. (I don't like slow CAM's)His pace with hunter is overall very good.Shooting.. Fantastic shoots, both volleys, p...
Read full review

Wow. I did not expect to be writing my first review of fifa 21 on this guy, nor did I expect him to be the most game changing player this year (yes, I have an untradeable gold CR7). Quite honestly the most fun CF I've used this year. I say CF because despite playing mainly at ST for me (occasionally at CAM), he seemed to be neither 100% a striker or 100% a cam. However, his runs in behind were sublime, just about having eno...
Read full review
0
/600
Update my avatar Dos and don'ts
Top Rated
New
Controversial
Show comments