This is the first time I've ever reviewed a player on here, so you know it's serious. From the moment I got this card I knew he was gonna be special. He has the Icon-factor that often gets mentioned by people. Whenever Bergkamp gets the ball, something special happens. I really can't comparing him to any other player, because he is in a league of his own. He cost me around 860k which is (imo) a huge price to pay, but oh boy is he worth it. In 29 Fut champs games he scored 67 goals. It felt like every game is a hattrick for him. This man glides on the pitch. Now I'm telling you, he isn't the fastest, but he got a nice run with some strength to keep defenders off. He held his ground against Varane and showed Van Dijk who his daddy is.

It's enough with a hunter on him. Use him for quick 1-2's around the box, but don't go down the wing trying the pace abuse with him.

He should have 6* weakfoot cause even 5* would't do him justice. Every shot is a goal, nothing else there to say.

It's good enough for a striker, no complaints here.

He doesn't have the highest agility and or balance but it gets the job done. The Icon-factor stands out here where other mortal plauers can't get the ball off of him. Also considering he has decent strength which helps him fight of Van Dijks annoying ponytail.

His price maybe? But then again I haven't seen a cheaper/better Icon option than him. 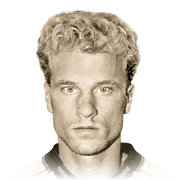 Bought this man in the beginning of the WL and wow... what a card! Played him as a striker in 4222 formation. This man got me to Gold 1 and even 17-4 at one point. He isn't the fast and agile player like everyone uses as meta but this card just blows the meta away.
Read full review

Playing this card at the CAM position was quite fun. His positioning, pace, shooting (his finesse shots are incredible by the way) and passing were quite good in general. The only thing that I dislike was his turn speed. It is not slow, but I like to use a CAM, CF or a ST that possesses the meta turn speed (like Ben Yedder for instance).
Read full review

Not Bad Not Amazing Either

I opened the Mid Icon pack seeing the Netherlands flag in hopes that it'd be Cruyff or Gulllit but it was Bergkamp. Don't get me wrong he is definitely better than Litmanen, Inzaghi, Laudrup, etc, and he does have flashes of greatness but playing Fut Champs in January where everyone has superteams I find that he lacks the ability to keep up with other players in current FIFA. F...
Read full review
0
/600
Update my avatar Dos and don'ts
Top Rated
New
Controversial
Show comments