So, first of all: I'm not english, I'm a german Kartoffel, so don't cry about my grammar please.

I normally finish WL Gold 1/Elite 3. I TRY to play the game for fun, not for sweating my a$$! (obviously most of the time not fun to play, but play it anyway because I'm stupid)

I don't pay a single penny in this game, so I usually don't have the coins to buy all those heavy meta players for one team.

The only way I earn some money is by collectin WL rewards, which are sh** most of the time :)

Whatever, in previous Fifa Neymar have been the best card to fit my playstyle and brings the most fun.

Same in this year!!!!!! Outrageous how beautiful he is!!!! YEEEEAEEAEAEAAAH!!!!!

So consdering his price which is 800k, this is the best value for money player that comes to my mind.

Before him I got Douglas Costa RB (who plays very similiar) because he was very cheap considering how good his stats look.

But something was missing against all those 0815 Varane Mendy Gomez Walker defence. By the way what about trying to be some more creative???

We all know how hard it can be to play against those 4 if you don't have those special players.

And let me tell you, he is in my opinion the best offensive gold card in the game!!!

You might be able to hear out how much I hate to play against Varane!!!

So let's come to his Pro's:

He'll be faster than every defender on the pitch!

Bangs in every Shot, no matter how bad the angle is.

Not to forget the outside foot shot trait.

Sometimes if I don't know what to do, I just shoot and he decides by his own what to do with that situation.

Right foot, left foot, I also scored a Scorpion kick with him.

I play him in a two striker formation, so the tiki-taka is obviously great with him by looking at his passing stats.

I also played him at CAM, where i could feel the 90 vision.

Sometimes takes passes in gaps where not even myself saw one!

So nothin to cry here AGAIN!!!

Oh, and sometimes also played some passes with opponents Varane, who was too scared because of the slaps so he assisted to Ney.

We all know what it means to play Neymar.

The best in the game probably.

So smooth, fast, just spitzenklasse to play him.

5* skills makes him even more dangerous in front of the goal.

Very often opponents Varane left the pitch injured because my Neymar made a pretzel in his legs.

Honestly, just crazy how fast you can skill, twist and turn around the defenders like they are nothing!

It's just so unpredictable to suspect what he is going to do in front of the goal.

This might be one of those aspects that makes opponents cry and quick sell there Varane's.

And even with bad servers (like often, VERY OFTEN!!!!!!) he plays the smoothest on the pitch.

So now you might know that he's is the best dribbler out there in this game.

I play him on stay forward to create the game, not to stop the opponents attackers!

So I won't tell you anything about the defending.

But he sometimes steal the ball out of Varane's pretzel legs.

So, many said that he would be too weak.

Yeah, he probably is not the strongest. But that might be also a fact why he plays this smooth and quick.

So in my opinion, he just got the perfect Body Type/strength, to match his other stats!

Sometimes Varane try's to shoulder him... BUT THEN HE JUMPS OVER HIM TAKE A SH**T ON HIS HEAD AND DANCES IN THE CAMERA AFTER SCORING ANOTHER BEAUTY OF A GOAL!!!!!!!!! So no Problem with this one.

The only weaknes I would say is his stamina.

He always plays 90 minutes for my badge, but sometimes he can be a little tired after 80 mins.

But honestly, he can play anyway, just because he feels the same dangerous in the penalty area!

So by ending this Review, I can tell you: BUY THIS CHEEKY CARD!!!

800k is an absolute joke considering Mbappe is still 1.2M.

Will probably stay in my team till end of Fifa 21 if I don't break all of my controllers till then!!!!

STAY SAFE, buy him, smile and try to enjoy the Game once again, after there are too many stupid things that makes you raging like me.

THANKS IT'S DJWAGGY I'M OUT

-Make pretzels out of Varane's legs (love it)

-Can't have two of him 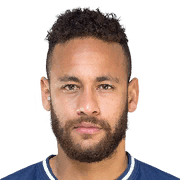 I was lucky enough to pack this beast in a 50k objectives pack, scoring 100 finesse goals. But where can I start? This man is so incredibly good. He is agile, fast and his finishing is absolutely top-notch. At this stage of the game Neymar even feels better than he was in FIFA 20 but that's also because defending is extemely hard. But the Brazilian main man glides through every defence with such ease. Thanks to him, I won e...
Read full review

Neymar Jr. Where do I start. Packed this geezer out of a Rare Mega and DANG he is a game changer! I used him in a 4-3-3(4) at the striker position and he will not stop scoring. Sometimes I need sub him off because he has already scored a double hat-trick in the first half and need to at least give the other team a chance. Neymars high price of over a million at the time of writing this may be expensive for some but trust me...
Read full review

Originally, I wasn't going to get FIFA 21 because I'm very unlucky and relatively average. However, when the Web App released I thought why not do the advanced SBCs for an attempt at something. I spent around 30k to finish the First XI SBC in Hybrid Leagues. I hadn't packed anything over 50k value by that point. Then I saw inform Taggart rise out of that back. I was very disappointed and was about to quit FIFA when Neymar a...
Read full review
0
/600
Update my avatar Dos and don'ts
Top Rated
New
Controversial
Show comments