my earlier review was on Gareth Bale i gave him 4,5 star check it out if you want to use him and now to the review Dean Henderson. 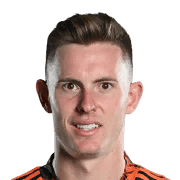