Where do I start. I used this card last year for a while and he was a pleasure to use. Went liquid a few weeks ago before the inevitable market crash so I could buy a star player again. Wasn't planning on using him again, just came across him while searching for a new star man. Was about to expire on bid for less than 1 million so got involved in the bidding and couldn't believe I won him 984k. I was going to flip him over night for 1.2 million but couldn't help but use him in the weekend league. Used him up top with my red Alex Teixeira in a 4-2-2-2. I can't believe I'm going to say this but, he is even better than last year. This man is just an animal. Best player I have used this year by a long shot. The combo of finesse and outside the foot shot is mad, add flair and you have one insane player. Managed to get Gold 1 for the first time this year (I can't defend this year but I score goals for fun. My tactic is to outscore the opponent). He scored in every game bar 2 and scored so many hattricks! Put an engine on this card, needs that little dribbling boost cause EA mugged him off. Gave him a 4 star value because he is 1 million coins but to me he is worth every single penny and more, as I said this was going to be a flip but he will not be leaving the club. DO NOT SLEEP ON THIS CARD!

Pace is not an issue with this man because he is so good at dribbling. Could be faster but doesn't need it. (Stick a hunter on him and this is 10 but Engine is the one trust)

In the box he won't miss. Finesse shot, outside the foot, weak foot it doesn't matter it will go in the back of the net. Even bangs them outside the box most of the time. Scored a few naughty goals this weekend which left me speechless. His volleys are something else. Especially off of a rainbow flick or over the top through ball.

His passing is also amazing (probably due to using engine). Created goals as well as scoring them. Played some lovely through balls and he won't misplace a short pass.

Do I need to say anything here. Just like in real life he skips past players with ease. Makes defenders look silly. The agile dribbling is insane. I tried Messi and honestly Bergkamp is better. Mugged off so many people this weekend and scored many goals off of filthy dribbles.

He actually tracked back a couple times and tackled people, I was very surprised.

Not the strongest player but will hold off a lot of defenders and I honestly didn't notice him die at the end of any games even in extra time.

This man scores not just goals but good goals for fun. Pleasure to use. Scored so many Bergkamp esc goals.

He honestly doesn't have any that matter. If I was being picky, he could be faster (Put a hunter on him if this is an issue) and he could be stronger. Could have more stamina but didn't have a problem with him getting tired.

0 cons is a fair statement 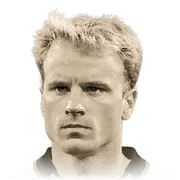 Bergkamp, a player you can count on

I bought Bergkamp becuase a wanted a new card to try and have fun (i dont like to buy meta card that everydoby use). Bergkamp prime icon looks like a nice option to get into my squad. He is very solid as a CAM player. His passing and distribution of ball is excelent, never had someone with that skills before in this fifa. For CAM position in a formation like 4-2-3-1 i like players as Bergkamp. The medium/medium workrate i c...
Read full review

I managed to pack him when the prime icons were released in to packs, of course when anybody has that Dutch flag pop up with CF they are hoping for cruyff. However as an arsenal fan I was happy to pack him and thought I'd try him before selling. Instead of using him as a ST I use him as a CAM and put the catalyst chem style on him. First game I was getting the feel of him and how best to use him but honestly I do not regret...
Read full review
0
/600
Update my avatar Dos and don'ts
Top Rated
New
Controversial
Show comments