When I opened my 25x83 pack and got only one walkout I thought it was the end of my fifa until icon sbc's were re-released. I submitted all my squads and opened the pack, who comes out? Marcel Desailly. Needless to say he walked straight into my team. Alongside Van Dijk he transformed my back line meaning that when anyone broke free there was always a chance of catching them up, and Desailly, 8 times out of 10 would do just that.. On top of the beast like defensive attributes, Desailly felt smooth on the ball and could turn out of dodgy situations easily and move the ball on. With the 6 foot 1 height he added the goal threat at corners without feeling clunky. If you have the money or, like me, are lucky enough to pack him in an Icon Pack then I couldn't recommend using him enough as he has better than all the other well used centre backs in the game like, Van Dijk, Gomez and Varane and will constantly produce 10/10 performances.

Feels very smooth despite the low agility and balance.

Apply shadow for unreal pace, catches up with the likes of Mbappe in no time.

Good height so can score goals at corners.

Icon swaps and sbc's are out so he is packable. 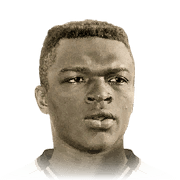 So luckily i opened my 500 goals reward and what happened? This man walks out my pack. Fit straight into my team with varane to make a beast cb partnership. After 42 games with him i must say he is probably the best cb i have used in any fifa. HIs positioning really puts him in a good spot against any meta attacks from scoring. Used a shadow to give him 94 pace and 94 defending.
Read full review
0
/600
Update my avatar Dos and don'ts
Top Rated
New
Controversial
Show comments