I used his 89 card since I could afford it, and I loved it. Then when the first batch of primes were released I was quite sad he wasn't in it, then the second batch came and I decided to sell Neymar and his 89 card to fund this one. He cost me 757k on bid, and I was really skeptical as you can pick up his baby and mid icons for less than 300k each. On his 89 card you really notice the turning and lack of speed when trying to accelerate away, however the small boosts to key areas like agility, sprint speed and balance have made such a huge difference! His dribbling feels better than his 89, the passing is still mesmerising and his shooting, just WOW! Finesse shots with this guy from the right angles just fly in. I loved watching him growing up, and its such a joy that his Icon card is so good this year.

This card does not fit the fast playstyle, as a legend once said about JR10 "If we have to travel from A to B, most of us take the six-lane highway & get there as quickly as possible. Everyone, except Riquelme. He’d choose the winding mountain road, which takes him six hours, but that fills your eyes with scenes of beautiful landscapes."

Use the 5* skill moves and weave round defenders with him, just not at speed, if you use this card to its strengths you wont be disappointed. 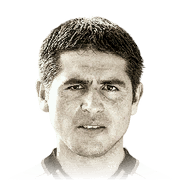 I grew up watching JRR. I love this guy... In real life. EA done him dirty man. He was easily top 20-30 to ever play the beautiful game. His ball control and dribbling was obscene, his passing was great, his shooting was great. And his pace, I would've given him 77-83 pace, he wasn't that slow. His ability to body defenders and his physical play style should've made hime 80-85 PHY. In-game he just feels slow and sluggish, h...
Read full review
0
/600
Update my avatar Dos and don'ts
Top Rated
New
Controversial
Show comments