Hi, this is my first review ever and I'm pretty happy to do it on this beast. I'm Italian and I'm a Roma fan, so I'm like the complete opposite of Klose, but I always liked him for his style of play and for the great person he is.

I needed a top goalscorer in the 4-2-3-1 formation and a few days ago I could finally afford him. I usually do gold 3/2, but thanks to him I managed to do gold 1 for my first time ever!

In 30 WL matches, he scored 74 goals and also had 13 assists, he's unreal, this man finishes from everywhere, with both left and right foot, and my God how good his headers are.

With hunter, he really hasn't got any problems in terms of pace, when you play a through ball he even manages to keep the advantage facing players like Joe Gomez or Kounde rttf.

A very important thing that helped me a lot in difficult games is his combo of positioning-jumping-headers-volleys. Often when I faced very good opponents, I struggled in finding a way to create chances but thanks to Miro I simple crossed the ball in the box and he jumped scoring goals after goals, if he's in a decent position and you do a good cross, it's gonna go in, he also bullied Van Dijk for me in this weekend, there's no defender that was better than him in this occasions (obviously you don't have to spam crosses, you have to them at the right time in the right way or else the defender is gonna get the ball, but when Klose is in the right position and it's a fifty-fifty you're gonna get the ball).

He obviously doesn't fit the meta, but if you like this kind of players, he's gonna pay you back every single coin you spent on him, believe me, you won't have any regrets.

pace: with hunter he's got no problem outpacing most of the defenders

passing: not a big deal, but the simple short passes he had to do were right

dribbling: he's not a meta player so you're not gonna go on a skill run trying to go through everyone, but he felt good on the ball and with some stepovers, fake shots and ball rolls he can dribble anyone, if you want him in your squad learn how to do them.

physical: godly jumping, can play for 120 mins and also showed a good strength ( can easily shield off quite any defender)

a bit of agility 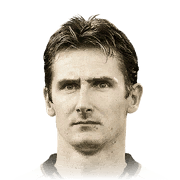 Klose - only for those who love him

I really stagnated on my old team and needed a new one. Because I got ripped of by EA a lot the last Weekend League I told myself f*ck it : I wont sweat for the win anymore. I started to make a team with players I love/loved to see playing in real life.The first player that came to my mind was Klose, my absolute childhood hero. From the last Fifa parts I knew he was never meta but always fun to play with.
Read full review
0
/600
Update my avatar Dos and don'ts
Top Rated
New
Controversial
Show comments