i have never done a review, but i just had to for the card. i am a div 1 gold 1 player and for TOTY i always go liquid and just opened my icon swaps base or mid pack and it was mid suker(who's not good except his shooting) I had a bit of fodder in my club so I decided to do a base or mid icon sbc. i did icon roulette and went to spain, I already have base icon puyol so wasn't expecting anything when I checked, but when I saw butra i was extatic.

i play him upfront in a 442 with my untradable neymar and on the wings base zola and potm felix. i have only played a few games but can already tell he's much better than him. his shooting with the finnese shot trait is insane and can score from anywhere with his 5* WF. his dribbling and pace is amazing with his agility and his size. working with neymar on get in behind his through balls and passing was really good with 90 vision. in 15 games he's scored 21 goals and 9 assists. the only problem I had with this card was his SM but I used neymar and felix for that and works well with them by the side of him. i have had no problems with his stamina and can last the whole 90 minutes but may get tired when it nears to the end of extra time. 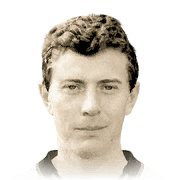 First I have to say this is one of my favorite card in fifa 20. In fifa 21, this card is still good enough to be considered fantastic. This man is moving like a ghost without a ball. He will definitely beat your opponent in lower div. In the high div, his strength does become a problem and you guys have to know how to use it by trying to avoid too much physical contact. As for shooting, with no doubt, butra is the best shoo...
Read full review

Insane Player! What a Clinical Finisher!

First review and English is not the first language. I try to find a striker around 1.5M in PC since I play a hybrid squad. I used to be a random D5 player, with Neymar Mbappe and Freeze Verrati in the front. Then I got this guy to play as my main striker in 4231. This dude is insane. This card brings me from D5 to D3 in just one week. Maybe I do improve myself, this is the first FIFA I play. However, this ...
Read full review

Hey guys, so it's my first review and for a first review I was thinking to do it to a very good player and I think the word is good for this BEAST named Butragueno.First of all, I've picked him yesterday and played some D1 games, he was very effective as his shootings abillites are fantastic it's simple every single shots are in or the keeper do a big save, his pace combined with his agility are crazy he m...
Read full review
0
/600
Update my avatar Dos and don'ts
Top Rated
New
Controversial
Show comments