At first, when I pulled this guy from a base icon pack, I was quite disappointed. I usually play 4231, and Xavi just doesn't seem to have the right stats for being neither a CAM, nor a CDM. I tried him out with a "shadow" as a secondary CDM a couple of times, but was not impressed at all, so for a couple of weeks I forgot about him, he was basically idling in my club.

Eventually, I was in the middle of a bad streak, being relegated to about 1670 skill rating from my usual 1900, and that's when I decided to give Xavi a second try. This time I put an "engine" on him, planted him as a secondary CDM on "balanced" alongside Kante, and this somehow changed my game. In two days I went back up to Division 1. Maybe this was due to a combination of factors like better connection, smother gameplay, DDA in my favor, and so on, but this time I found Xavi very, very efficient. Of course he is not a defensive monster like Kante, but he intercepts well and can steal the ball here and there a few times per game. He shows his best qualities in positional, possession-based attacks and counterattacks. With engine chemistry he feels very fast and a top-tier dribbler and passer. Silky-smooth with his turns and ball control, mercilessly precise with his passes - short, long, through balls, you name it. Sometimes (but really not often) he even scores due to his very good attacking positioning. Quite often, when everyone else in my team is stalling, he is the one who makes that run and lets me continue the attack. In my squad he is now a playmaker, a corner kick taker and a captain, also providing important chemistry links. His 83 stamina looks scary but isn't a big problem for me personally. He can usually make it through 120 minutes of a Weekend League game.

P.S.: You may notice that for the number of games he has played the number of assists doesn't seem too high. I'll just point it out that an important pass doesn't necessarily need to be the last one, it can also be the one before last. Anyway, for me his contribution to the link-up play is tremendous. 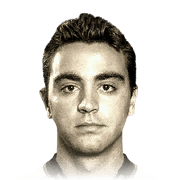 In my first pack opening in Fifa 21, I just opened this card. I am a Real Madrid fan, so my reaction was something like when Sergio Aguero opened a pack and saw Klopp. Later on, I was so pleased to have this legend in my team... he was and he will always be a football maestro.I looked his stats and i quickly understood that he could not be a CDM (because of the lack of physical and defence). So I had to decide to put...
Read full review

The first thing, sorry for my inglish. I used him on basic chemistry style. He's brilliant. He can give the ball to anyway and anybody and any distance. CM in 433(2), 433(5) or 41212 is the best position for him. He feels very fast and dexterous. Composure 92! is very important indicator. Spanish men can con...
Read full review
0
/600
Update my avatar Dos and don'ts
Top Rated
New
Controversial
Show comments