When Looking at this seasons icon swaps it is easy to become underwhelmed, but fear not, Deco is here to give you good value for your tokens. When I saw him I just knew I have to do him, with a plus 8 on his shooting compared to his prime card, you can definitely tell. He's really surprised me in the first five games I've played with him in rivals. His movements are quick, passes are crisp, and weak foot is almost unnoticeable. Though he may not have the finesse shot trait, his curve stat makes his shots whip off both feet especially with his great runs and positioning in the attacking third. His passing is almost unlimited in its ability, he split defenses when giving through balls to Higuain and uses his short and lean - body type very well, twisting and turning, always keeping the ball close to his body. The only flaws I saw with this card was that he wasn't as fast as I thought he'd be with and hunter and sometimes he gets bodied off the ball, but on a positive note he doesn't fall to the ground often.

All in all he's a great card to get for 7 tokens and you can get those 7 in about 4-5 hours with weeks to do it. He is probably the best value out of all the player selections available.

Nice Finesse and Outside Foot Shots 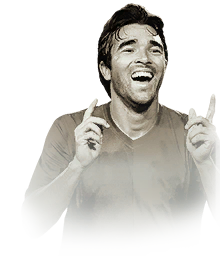 Disclaimer: massive Porto-Fan here. I did this card because this guy was one of my childhood heroes and it was mainly a pretty sentimental thing (I actually met him before this pandemic at a local pub, very nice guy).Now let's talk about the card itself: I think he's fun to use. If you don't care about the META and just want to play with players you love (I packed Neymar, I know, I shouldn't talk about not p...
Read full review

I state that this is my first review, and this player prompted me to write it, i needed a player to help me link my bruno 92 potm, I initially underestimated this card, but looking at the stats I asked myself, why not? so there are no other great players from icon swaps 2The card is sick on CAM, good pace, brilliant passing, amazing dribbling, man just look at the past year prime deco, is not the same card by far, th...
Read full review