I'm a big Newcastle United fan and throughout my childhood Shearer, obviously, was my favourite player. I was using his Mid card which was quality for me, but I decided to invest in his Prime Moments card and he's genuinely been class. I don't know what it is.. is it because he's an icon or whatever, but his in game stats don't do the card justice. He feels a lot better than what the card says.

First things first, I don't understand why people don't like him. I understand those who don't like the 2 star skill moves and all that but surround him with players that can do that - He's a finisher! I guess it depends what you want out of the game. I like playing with players I like in real life, not who's META are whatever it's called these days, and that's where I get my enjoyment. The likes of Henry and Shearer are players I loved as a young lad and having the feeling of banging them in with those two players feels great as a player, for me personally.

He is always in the position you'd want your striker to be in, with a Hunter card he has a turn of pace that honestly takes him away from most defenders and I genuinely believe his finishing is the best on the game.. He's the top goal scorer in Premier League history for a reason. Every time I have the chance to shoot with him, I take it, no matter where it is and he smashes them in 9 times out of 10, even with his "3 star weak foot". His passing is actually very good, he can be used as a target man, he holds the ball up really well and he can turn and spread the balls about like Lurpak on Tiger Bread.

If you're looking for a number 9 to finish chances, Shearer is your man. 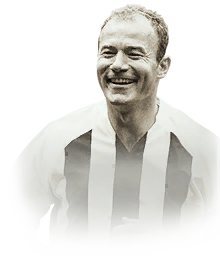