After yet another disastrous weekend league performance from Vidic I have decided to write my first ever futbin review. I was packed Vidic from the first set of icon shit swaps in the mid/prime icon pack which was quite unlucky since it was the 4th CB I got from icon packs (I opened 4 icon packs so, yeah). Anyway I decided to put Vidic into my first team because of his glorious stats.

At first it wasn´t so bad. He had good games and bad games as does every player, especially defenders. But later he really became horrible. I can´t stress enough how many times he loses the ball after I do a simple tackle to get it from the attacker, it costed me ton of goals. Of course, this happens to every defender sometimes because the game just wants the attacker to have the ball and tackling is broken AF, but with Vidic it happens so often that it cannot go unnoticed. He just doesnt respond after you get the ball and in most cases loses it to opponent straight away.

The other thing are the penalties. You will concede a lot of them with Vidic, and by a lot of them I mean a shit ton. This WL alone he costed me about 6 penalties (and also 2 ridiculous own goals which he scored). No other defender I have used has this super strong "concede penalty" trait. I can compare him to: base Cannavaro, toty Ramos, mid Nesta, rttf Koundé, What IF Pepe and Varane. He is by a mile worst of them in conceding penalties, rebounds and own goals.

I have used Vidic for 360+ games, thinking that it just must be in my head cause I mean look at his stats! They are great! But after this WL and especially my last match where I lost after having 4:1 lead because Vidic decided to leave my defence and give away a BS penalty for good measures, I have finally decided to get rid of him. I am starting to understand this stupid fullbacks at CB meta and I don´t like it. But when you have player like Vidic playing like a bronze defender, it´s really hard.

I am a G1, D1 (2100+) player and I don´t recommend Vidic to anyone ever, just buy Varane or literally anyone, Vidic is not worth it by any means.

I would say strenght but he still gets bullied by Mbappe so... 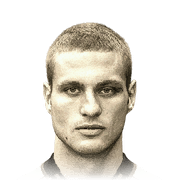 WHY THE HATE?! VIDIC IS GREAT!

Packed Vidic in the Prime Icon pack and was so excited to use this card. He has everything you'd want in a CB and with a Shadow Chem style he does everything you need. I think at this point in the game we all know how bad defending is in general, but Vidic shouldn't be the card to get the bad wrap. He's strong, tall, and actually feels good on the ball when he tackles. The only thing is his passing but honestly if you just ...
Read full review
0
/600
Update my avatar Dos and don'ts
Top Rated
New
Controversial
Show comments