When nostalgia hits you hard, what do you do? You start to sell normal players and bring in the LEGENDS. I was having tough decision whether to get which version of Giggs and ultimately pick Giggs (89) because it more well-rounded. I knew going in I would not be playing him LM/LW because majority of FIFA players knew he is 2 Star WeakFoot. So, I decided to play him at RCM beside who other than David Beckham (89).

Before I start, I wanted to clarify something. HE IS NOT SLOW WITHOUT PACE BOOST. HE CAN DRIBBLE. HE CAN PASS.

Speaking of Attacking, with his M/M workrate he would prioritize in the middle first than getting in behind when playing him at CM. That means I wanted to use Maestro to boost his longshot/shot power, passing and dribbling. Why not use catalyst you might ask. Because you do not really need pace playing in the middle. I take that back. (OFF TOPIC) I recently gotten Pirlo (92) and oh my god was he slow and hates to defend. Tl;dr he had 73 Pace. (BACK TO TOPIC). With the chemistry, Giggs is now a good card.

Moving on to Defending, in the first few games Giggs did not bother going back to defense but somehow after couple more games he started to track back. I know its weird. I did not change any tactics/instruction either. I am happy to say he may not be a Kante at defending but he is good at pressuring opponent and he can keep up with players (maybe not mbappe or Neymar).

Next stop is Passing, Oh My God, this guy passes like my Beckham. He can pass anywhere on the pitch. If you play extremely wide like me and need a CM to make extremely Long Pass, he is the one. Whenever he makes Long Passes, I’m always at disbelieve (my opponents too… I think). Somehow, he bends the ball like Beckham while making my Gerrard (92) jealous. (OFF TOPIC) Pirlo could not even pass because he could not even get to the ball fast enough. (BACK TO TOPIC)

So how is Dribbling, I would say very good. I think people has a misconception on he cannot dribble but try the card and you will be surprised. Obviously, he doesn’t have 5 star skill moves but you can always work around it.

In term of price, definitely a steal. If you have 200k laying around on the pitch sunbathing, I recommend trying out this card. Its not that much (for people who has been playing for a while or pack Ronaldo). 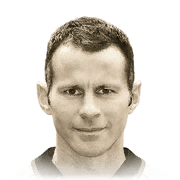