I was lucky enough to get Eto'o in my prime icon sbc, boy was I gassed to play with him. I am a div 1 player and regularly get gold 2 in fut champs. I normally pair Eto'o with another fast striker (Puskas) in 41212, 532 or 442 systems.

Honestly the stats on this card are not representative of how he plays in game, he is literally broken and finishes everything. He has good agression too which i find is very useful for pressing the opponent, matched with his insane pace once he knicks the ball off the defenders its game over. Speaking of pace, virtually no one can catch him, once hes through hes through. His slim body type does mean he gets pushed off the ball sometimes which I thought his decent strength might be able to deal with.

The best aspect of the card is obviously the finishing, it doesnt even need a chem style to make it overpowered (I use engine and hve tried many others, it works best). There have been many times where there is nothing on in the final 3rd and i have just finessed one top bins or just crossed it expecting it to come to nothing, but no Eto'o gets a toe on the ball and in the net it goes... again. If you want to get an icon striker and you have 2 mil to spare I would definitely choose this guy over Henry/Cantona/Torres.

There are so many good things I could go through for this card, jumping is another great aspect meaning hes an aerial threat, idk why he has 82 passing and 83 physical, like i said they are unrepresentative of his in game play, i think they should be 85 and 86 respectively. The only thing i found slightly weird about this card was the dribbling, it is really really good but there have been times where he turns and the touch is a little heavy.

I think the main point i need to make about this card is that it is extremely sweaty and jammy. Those situations when there is a little scramble in a tackle or challenge and you dont know who is going to come away with the ball really annoy you right? Eto'o always comes away with them, i really dont know how either. I recommend getting him obviously or just trying him as he is so fun to use.

Pace (speaks for itself)

Dribbling, lacks close control but this is very very rare 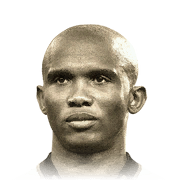 BEST STRIKER IN THE GAME SAMMMMMMYYYYYYY

This morning I was lucky enought to pack Sammy Prime in a guaranteed Mid/Prime icon upgrade pack. So i decided to use him as a ST in a classic 4-3-3 formation and DUUUUUDE, I have no words to describe Sammy. HE IS INSANE, an absolute goal machine.IMPORTANT ADVICE...
Read full review
0
/600
Click here to verify your account in order to comment Update my avatar Dos and don'ts
Top Rated
New
Controversial
Show comments