So, I finished the 92+ Icon Moments SBC and I was hoping for just something fun and playable. I got him, and I was quite happy, but I never used him or really seen him. So I put him to my Team, and oh boy, he's just so good.

I play him with Marksma by the way.

So, what makes him so good for me? I play 4-3-3(4), and my fast wingers are delivering a ton of good balls to him. He's like super fast, so he reaches 90% of them. Although he's quite small (5'10", 177cm) his headers are really good, as long he can reach them, so even crosses are quite effective. His physis combinded with his dribbling make him sh*t on CBs like VVD , Ramos and so on.

Okay, let's focus on just the best part, his shooting. 95 on his card, with the marksman he up goes to 98. (All stats from now are with marksman) 99 Finishing, 99 Shot Power, 99 Longshots, 93 Volleys and 97 pens. He, for me, scores just absurd goals. And just from everywhere. Sure, he has 3* Weak Foot, but for me it doesn't really matter tbh. And his freekicks are crazy, I have Roberto Carlos on leftback but he doesn't take them anymore :D.

I yet have to use him in WL, since I had no time last weekend, but I can just imagine how good he is there.

So, if you have the coins, don't really have a better Striker, try him! You won't regret it. Sure, if you play Moments R9 or someone of this calibar, maybe he isn't for you, but you get the point.

I hope this was a bit helptful and not too messy language. Have a nice day, thanks for reading and have fun with him!

Good Passing for a Striker 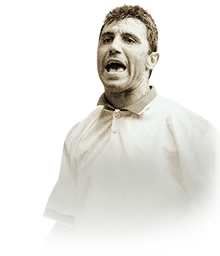 Packed Him out of an untradeable mega pack and used him for the last 3 games of fut champs this weekend. He is truly amazing everything about this card is amazing if this card had 4* weakfoot he’d be over 2 mill. He was bullying players like Toty van dijk easily. I even scored a screamer on his right foot. He is truly revolutionary for my club, he’s similar to moments Henry but he is so much smoother on the ball due to ...
Read full review

He is an amazing striker, with engine he have perfect pace, shooting, passing and dribbling, and he is very strong guy!If you are Barca fan, you have to get him. He scores every match at least one goal. His 3 star week foot is much more better then 3 star, I tell you. I scored with it many good goals.He is very aggressive, so when you pressure your opponent he looks good.And lost one, his vision and pas...
Read full review
0
/600
Update my avatar Dos and don'ts
Top Rated
New
Controversial
Show comments